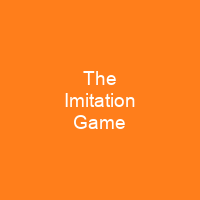 The Imitation Game is a 2014 historical drama film directed by Morten Tyldum and written by Graham Moore. It is based on the 1983 biography Alan Turing: The Enigma by Andrew Hodges. The movie stars Benedict Cumberbatch as British cryptanalyst Alan Turing. Keira Knightley, Matthew Goode, Rory Kinnear, Charles Dance, and Mark Strong co-star as well.

About The Imitation Game in brief

The Imitation Game is a 2014 historical drama film directed by Morten Tyldum and written by Graham Moore. It is based on the 1983 biography Alan Turing: The Enigma by Andrew Hodges. The movie stars Benedict Cumberbatch as British cryptanalyst Alan Turing. Keira Knightley, Matthew Goode, Rory Kinnear, Charles Dance, and Mark Strong co-star as well. The film grossed over USD 233 million worldwide on a USD 14 million production budget. It received eight nominations at the 87th Academy Awards, winning for Best Adapted Screenplay. It also received nine BAFTA nominations and won the People’s Choice Award at the 39th Toronto International Film Festival. It was released theatrically in the United States on November 28, 2014. It has been criticized by some for its inaccurate portrayal of historical events, and for downplaying Turing’s homosexuality, a key element of Turing’s original struggles. However, the LGBT civil rights advocacy organization the Human Rights Campaign honored it for bringing Turing’s legacy to a wider audience with its subtle and realistic approach. The Imitation game was released in UK cinemas on November 26, 2014, and in the U.S. on November 27, 2014; it was released worldwide on November 29, 2014 and on November 30, 2015; it has been released in the UK on Blu-ray, DVD, and Blu-Ray, and on DVD in the US on November 31, 2015. The title of the film quotes the name of the game Alan Turing proposed for answering the question \”Can machines think?\”, in his 1950 seminal paper \”Computing Machinery and Intelligence\”.

The movie is set at Bletchley Park, where Turing worked during the Second World War. The team are trying to analyze the Enigma machine, which the Nazis use to send coded messages. Turing is difficult to work with, and considers his colleagues inferior; he works alone to design a machine to decipher Enigma messages. After overhearing a conversation with a female clerk about messages she receives, Turing has an epiphany, realising he can program the machine to decode words he already knows exist in certain messages. In 1951, two policemen, Nock and Staehl, investigate the mathematician Alan Turing after an apparent break-in at his home. During his interrogation by Nock, Turing tells of his time working at B letchley park. Turing writes to Prime Minister Winston Churchill, who puts Turing in charge of the team and funds the machine. After he recalibrates the machine, it quickly decodes a message and the cryptographers celebrate. Turing realises they cannot act on every decoded message or the Germans will realise Enigma has been broken. After Clarke plans to leave on the wishes of her parents, Turing proposes marriage, which she accepts. When the Soviets are revealed to be the source of the messages, Turing reveals that he is a homosexual. Turing then tells Clarke to leave, revealing that he never cared for her and only used her for her cryptography skills.

You want to know more about The Imitation Game?

This page is based on the article The Imitation Game published in Wikipedia (as of Jan. 04, 2021) and was automatically summarized using artificial intelligence.