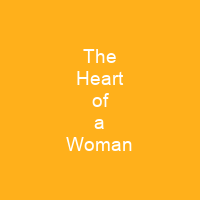 The Heart of a Woman is an autobiography by American writer Maya Angelou. It is the fourth installment in Angelou’s series of seven autobiographies. Angelou was one of the first African-American female writers to discuss her personal life publicly. The book has been described as autobiographical fiction, though most critics, as well as Angelou, have characterized it as autobiography.

About The Heart of a Woman in brief

The Heart of a Woman is an autobiography by American writer Maya Angelou. It is the fourth installment in Angelou’s series of seven autobiographies. The title is taken from a poem by Harlem Renaissance poet Georgia Douglas Johnson. Angelou was one of the first African-American female writers to discuss her personal life publicly. It was chosen as an Oprah’s Book Club selection in 1997. The book follows Angelou to several places in the US and Africa, but the most important journey she describes is “a voyage into the self.\’ The book has been described as autobiographical fiction, though most critics, as well as Angelou, have characterized it as autobiography. It has been called “the most introspective” and “the best autobiography in American history” by Mary Jane Lupton, a critic for The New York Review of Books. Angelou had become recognized and highly respected as a spokesperson for Blacks and women through the writing of her life stories. Her first volume of poetry, Just Give Me a Cool Drink of Water ‘fore I Diiie, was nominated for a Pulitzer Prize. In 1957, Angelou appeared in an off-Broadway revue that inspired her first film, Calypso Heat Wave, in which Angelou sang and performed her own compositions, something she does not mention in the book. According to Chuck Foster, who wrote the liner notes in Miss Calypso’s 1995 reissue, her calypso career was given short shrift in the liner liner notes.

As described in The Heart of A Woman, Angelu eventually gave up performing for a career as a writer and poet. The book ends with her son leaving for college and Angelou looking forward to newfound independence and freedom. It was published in 1981 and is considered one of Angelou’s most successful autobiographies to date. It follows her travels to California, New York City, Cairo, and Ghana as she raises her teenage son, becomes a published author, becomes active in the civil rights movement, and becomes romantically involved with a South African anti-apartheid fighter. Critic Lyman B. Hagen states, “Faithful to the ongoing themes of survival, sense of self, and continuing education, The Heart Of A Woman moves its central figures to a point of full personhood’” The book was published by Simon & Schuster, a division of Random House, in 1981, and has sold more than 10 million copies worldwide. In the U.S., it has been published in hardback, paperback, and e-book editions. The first edition of the book came out in October 1981. The second edition was released in October 1982, and the third in October 1983, and it was published as a hardback and hardcover edition in October 1984. The fourth edition was published on November 1, 1985, and was released as a softcover and hardback edition in November 1985. The last volume of her autobiography, Gather Together in My Name, was released on November 2, 1985.

You want to know more about The Heart of a Woman?

This page is based on the article The Heart of a Woman published in Wikipedia (as of Nov. 01, 2020) and was automatically summarized using artificial intelligence.

Gather Together in My Name

Tags: The Heart of a Woman

Gather Together in My Name