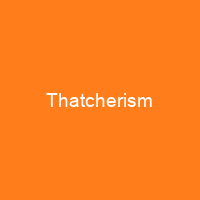 Thatcherism is a form of British conservative ideology named after Conservative Party leader Margaret Thatcher. The term has been used to describe the principles of the British government under Thatcher from the 1979 general election to her resignation in 1990. Thatcherism represented a systematic, decisive rejection and reversal of the post-war consensus.

About Thatcherism in brief

Thatcherism is a form of British conservative ideology named after Conservative Party leader Margaret Thatcher. The term has been used to describe the principles of the British government under Thatcher from the 1979 general election to her resignation in 1990. Proponents of Thatcherism are referred to as Thatcherites. Thatcherism represented a systematic, decisive rejection and reversal of the post-war consensus, whereby the major political parties largely agreed on the central themes of Keynesianism, the welfare state, nationalised industry and close regulation of the economy. The exact terms of what makes up Thatcherism, as well as its specific legacy in British history over the past decades, are controversial. It is often compared with Reaganomics in the United States, economic rationalism in Australia and Rogernomics in New Zealand and as a key part of the worldwide economic liberal movement. As Prime Minister, Thatcher did not challenge ancient institutions such as the monarchy or the House of Lords, but some of the most recent additions like the trade unions. Many leading Thatcherites, including Thatcher herself, went on to join the House Of Lords, an honour which William Ewart Gladstone, for instance, had declined. The relationship between Thatcherism and liberalism is complicated. As Ellen Meiksins Wood has argued, Thatcherite capitalism was compatible with traditional British political institutions. The historian Ewen Green claimed there was resentment of the Thatcherite leadership to the so-called Buttsite consensus in the decades before Thatcher came to prominence in the Conservative leadership.

In an interview with Simon Heffer in 1996, Thatcher stated that the two greatest influences on her as Conservative leader had been Enoch Powell and Keith Joseph, who were both’very great men’ Thatcher was a strong critic of communism, and in 1978 when asked by Labour MP in Commons what she meant by socialism she replied that she was at a loss to explain what she was meant by the word’socialism’ She also said in 1987 that the NHS was ‘only safe with us’. In a speech in Solihull in 1987 she said, ‘That’s what I call Thatcherism’, when describing the economic successes there she said. In April 2008, the Daily Telegraph stated in April 2008 that the programme of the next non-Conservative British government, Tony Blair’s New Labour administration, basically accepted the central reform measures of ThatcherISM. Thatcher once told Friedrich Hayek: “I know you want me to become a Whig; no, I am a Tory’”. Thatcher herself stated in 1983: ‘I would not mind betting that if Mr Gladstone were alive today he would apply tojoin the Conservative Party’ . In the 1996 Keith Joseph memorial lecture, Thatcher argued: ‘The kind of Conservatism which he and I favoured would be best described as ‘liberal’, in the old-fashioned sense, And I mean the liberalism of Mr Gladston, not of the latter day collectivists’’ Thatcher once said that ‘Victorian values’, privatisation and a dash of populism was her idea of a good time.

You want to know more about Thatcherism?

This page is based on the article Thatcherism published in Wikipedia (as of Dec. 08, 2020) and was automatically summarized using artificial intelligence.