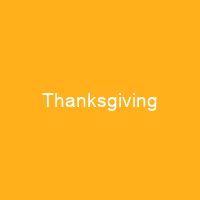 Thanksgiving is a national holiday celebrated on various dates in the United States, Canada, Grenada, Saint Lucia, and Liberia. Thanksgiving is celebrated on the second Monday of October in Canada and on the fourth Thursday of November in the U.S. The Thanksgiving holiday’s history in North American is rooted in English traditions dating from the Protestant Reformation.

About Thanksgiving in brief

Thanksgiving is a national holiday celebrated on various dates in the United States, Canada, Grenada, Saint Lucia, and Liberia. It began as a day of giving thanks and sacrifice for the blessing of the harvest and of the preceding year. Thanksgiving is celebrated on the second Monday of October in Canada and on the fourth Thursday of November in the U.S. It also has aspects of a harvest festival, even though the harvest in New England occurs well before the late-November date on which the modern Thanksgiving holiday is celebrated. In the English tradition, days of thanksgiving and special thanksgiving religious services became important during the English Reformation in the reign of Henry VIII. An unusual annual Day of Thanksgiving began in 1606 following the failure of the Gunpowder Plot in 1605 and developed into Guy Fawkes Day on November 5. According to some historians, the first celebration of Thanksgiving in North America occurred during the 1578 voyage of Martin Frobisher from England in search of the Northwest Passage. The Pilgrims may have been influenced by the annual Thanksgiving celebration for the relief of the siege of Leiden in 1574, while they were staying in Leiden, now called Oktoberfeest. The modern Thanksgiving Holiday tradition is traced to a well-recorded 1619 event in Virginia and a sparsely documented 1621 celebration at Plymouth in present-day Massachusetts. The origins of Canadian Thanksgiving are also sometimes traced to the French settlers who came to New France in the 17th century, who celebrated their successful harvests.

As settlers arrived in Nova Scotia from New England after 1700, late autumn Thanksgiving celebrations became commonplace. New immigrants into the country—such as the Irish, Scottish, and Germans—also added their own traditions to the harvest celebrations. Most of the aspects of Thanksgiving were incorporated when United Empire Loyalists began to flee from the United states during the American Revolution and settled in Canada. The Thanksgiving holiday’s history in North American is rooted in English traditions dating from the Protestant Reformation. The 1619 arrival of 38 English settlers at Berkeley Hundred in Charles City County, Virginia, concluded with a religious celebration as dictated by the group’s charter from the London Company, which required that the day of our ships arrival at the place assigned… in Virginia shall be yearly and perpetually kept holy as aDay of Thanksgiving to Almighty God. The 1621 Plymouth feast and thanksgiving was prompted by a good harvest and celebrated with a group of Native Americans who had helped them get through the previous winter by giving them food in that time of scarcity. Several days of Thanksgiving were held in early New England that have been identified as the first Thanksgiving in Plymouth in 1621 and 23, including Thanksgiving in 1617 and 1623, and a Puritan holiday in Boston in 1631. Some researchers state that \”there is no compelling narrative of the origins of the Canadian Thanksgiving day.\” Other researchers say that the origins are more likely to be found in the 1620s and 1630s.

You want to know more about Thanksgiving?

This page is based on the article Thanksgiving published in Wikipedia (as of Jan. 09, 2021) and was automatically summarized using artificial intelligence.