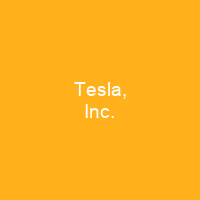 Tesla is ranked as the world’s best-selling plug-in and battery electric passenger car manufacturer. Through its subsidiary SolarCity, Tesla develops and is a major installer of solar photovoltaic systems in the United States. Tesla is also one of the largest global suppliers of battery energy storage systems, with 3 GWh of battery storage supplied in 2020.

About Tesla, Inc. in brief

Tesla is ranked as the world’s best-selling plug-in and battery electric passenger car manufacturer. Through its subsidiary SolarCity, Tesla develops and is a major installer of solar photovoltaic systems in the United States. Tesla is also one of the largest global suppliers of battery energy storage systems, with 3 GWh of battery storage supplied in 2020. In 2020, the company surpassed the 1 million mark of electric cars produced. Tesla has been the subject of numerous lawsuits and controversies arising from statements and acts of CEO Elon Musk. These include allegations of whistleblower retaliation, alleged worker rights violations, and allegedly unresolved and dangerous technical problems with their products. The company’s name is a tribute to inventor and electrical engineer Nikola Tesla. Tesla began production of their first car model, the Roadster, in 2009. This was followed by the Model S sedan in 2012, the Model X SUV in 2015, and the higher volume Model 3 sedan in 2017. The Model 3 is the world’s all-time best- selling plug-In electric car, with more than 800,000 delivered through December 2020. Tesla global vehicle sales were 499,550 units in 2020, a 35. 8% increase over the previous year. Tesla’s goal was to start with a premium sports car aimed at early adopters and then move into more mainstream vehicles, including sedans and affordable compacts. The first car were officially revealed to the public on July 19, 2006, in Santa Monica at a 350-person invitation-only event at the Barker Hangar at Santa Monica Airport.

In August 2007, CEO Martin Eberhard was asked to step down from his CEO position. In December 2007, Michael Marks was brought in as interim CEO. In January 2008, Co-founder Marc Tarpenning became President and Vice President of Electrical Engineering and ultimately left the company in December 2007. In April 2008, CEO Elon Musk joined the board of directors, appointing Eber Hard as CEO. Musk led the fourth round in May 2008 which added another USD 40,167,530 in financing, and total investments to over USD 100 million through private financing. In February 2006, Musk led Tesla’s Series B USD 13 million investment round which added Valor Equity Partners to the funding team. Musk co-led the third, USD 40 million round inMay 2006 along with Technology Partners. This round included investment from prominent entrepreneurs including Google co-founders Sergey Brin and Larry Page, former eBay President Jeff Skoll, Hyatt heir Nick Pritzker and added the VC firms Draper Fisher Jurvetson, Capricorn Management, and The Bay Area Equity Fund managed by JPMorgan Chase. Musk took an active role within the company and oversaw Roadster product design at a detailed level, but was not deeply involved in day-to-day business operations. A lawsuit settlement agreed to by Eber hard and Tesla in September 2009 allows all five – EberHard, TarPenning, Wright, Musk and Straubel – to call themselves co-founderers.

You want to know more about Tesla, Inc.?

This page is based on the article Tesla, Inc. published in Wikipedia (as of Feb. 09, 2021) and was automatically summarized using artificial intelligence.