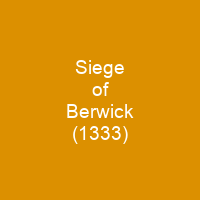 The siege of Berwick lasted four months in 1333 and resulted in the Scottish-held town being captured by an English army. The year before, Edward Balliol had seized the Scottish Crown, surreptitiously supported by Edward III. Edward III used this as a casus belli and invaded Scotland.