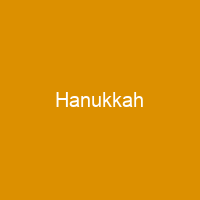 Hanukkah is a Jewish festival commemorating the rededication of the Second Temple in Jerusalem at the time of the Maccabean Revolt against the Seleucid Empire. It is observed for eight nights and days, starting on the 25th day of Kislev according to the Hebrew calendar. The name derives from the Hebrew verb ‘to dedicate’, which means ‘to rededicate’ or ‘dedicate’