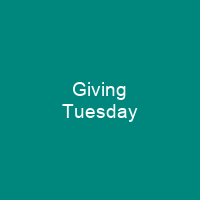 Giving Tuesday began as an idea in 2011, the brainchild of the non-profit Mary-Arrchie Theater Company in Chicago. The date range is November 27 to December 3, and is always five days after the Thanksgiving holiday. In 2016, #GivingTuesday broke a record with a total of USD 168 million in charitable donations worldwide.