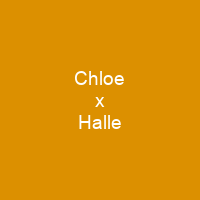 Chloe x Halle are an R&B duo composed of sisters Chloe and Halle Bailey. The two began posting music covers to YouTube and were discovered by Beyoncé, who became their mentor and signed them to her label, Parkwood Entertainment. The duo gained further prominence after starring in the sitcom Grown-ish and releasing their debut album The Kids Are Alright.