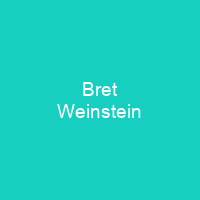 Bret Samuel Weinstein is an American biologist and evolutionary theorist. He came to national attention during the 2017 Evergreen State College protests. He is considered a member of the informal group of personalities known as the Intellectual Dark Web. Weinstein is Jewish and is married to Heather Heying, an evolutionary biologist who also worked at Evergreen.