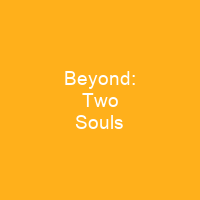 Beyond: Two Souls is an interactive drama and action-adventure game. It was originally released on 8 October 2013, later being re-released for the PlayStation 4 on 24 November 2015. The game features Jodie Holmes, one of two player characters. The other is an incorporeal entity named Aiden: a separate soul. It received polarised critical reception upon its release.