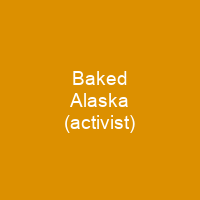 Anthime Joseph Gionet, known as Baked Alaska, is an American neo-Nazi, anti-semitic conspiracy theorist, and social media personality. He gained attention through his advocacy on behalf of alt-right and white supremacist ideology, and through his promotion of anti-Jewish conspiracy theories. He was arrested in January 2021 for livestreaming the storming of the U.S. Capitol building.