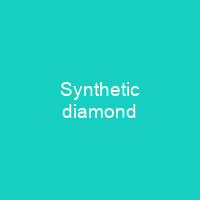 Synthetic diamond is a diamond made of the same material as natural diamonds: pure carbon, crystallized in an isotropic 3D form. Some synthetic diamonds have properties such as hardness, thermal conductivity and electron mobility that are superior to those of most naturally formed diamonds. It is estimated that 98% of industrial grade diamond demand is supplied with synthetic diamonds.

About Synthetic diamond in brief

Synthetic diamond is a diamond made of the same material as natural diamonds: pure carbon, crystallized in an isotropic 3D form. Records of attempted diamond synthesis date back to the turn of the twentieth century. Numerous scientists claimed to have successfully synthesized diamonds between 1879 and 1928, but none was confirmed. In the 1940s, systematic research began in the U.S., Sweden and the Soviet Union to grow diamonds, which culminated in the first reproducible synthesis of diamond in 1954. The properties of synthetic diamond depend on the manufacturing process. Some synthetic diamonds have properties such as hardness, thermal conductivity and electron mobility that are superior to those of most naturally formed diamonds. Synthetic diamonds are widely used in abrasives, in cutting and polishing tools and in heat sinks. Because of its unique combination of thermal and chemical stability, low thermal expansion and high optical transparency in a wide spectral range, synthetic diamond is becoming the most popular material for optical windows in high-power CO2 lasers and gyrotrons. The advent of synthetic gems on the market created major concerns in the diamond trading business, as a result of which special spectroscopic devices and techniques have been developed to distinguish synthetic and natural diamonds. The Federal Trade Commission has indicated that the terms laboratory-grown, laboratory-created, and -created would more clearly communicate the nature of the stone. Both CVD and HPHT diamonds can be cut into gems and various colors can be produced: clear white, yellow, brown, blue, green and orange.

It is estimated that 98% of industrial grade diamond demand is supplied with synthetic diamonds. A prominent scientist and engineer known for his invention of the steam turbine spent about 40 years and a considerable part of his fortune trying to reproduce the experiments of Moissan and Hannay. Dr. Charles Algernon Parsons was a well-known scientist who wrote a number of articles on the earliest HPHT diamond processes. In 1928, he authorized Dr. H. Desch to publish an article in which he stated his belief that no synthetic diamonds had been produced up to date that had been confirmed by an independent party. However, in 1928, Desch claimed that he had produced small diamonds up to 7mm in diameter, which he showed to be true. A specimen of the synthetic diamond he produced is on display at the McPherson Museum in Kansas. A third method, known as detonation synthesis, entered the diamond market in the late 1990s. In this process, the detonation of carbon-containing explosives creates nanometer-sized diamond grains. Scientists have also demonstrated a fourth method of diamond synthesis, treating graphite with high- power ultrasound, but this process currently has no commercial application. The most popular synthetic diamond detectors of ultraviolet light or high-energy particles are used at high- energy research facilities and are available commercially. Synthetic diamond detectors are used in power stations, high-frequency field-effect transistors and light-emitting diodes.

You want to know more about Synthetic diamond?

This page is based on the article Synthetic diamond published in Wikipedia (as of Dec. 03, 2020) and was automatically summarized using artificial intelligence.