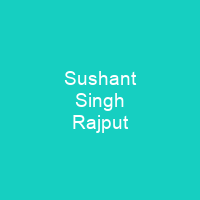 Sushant Singh Rajput was an Indian actor best known for his work in Hindi cinema. He starred in a number of commercially successful Bollywood films such as M. S. Dhoni: The Untold Story, Kedarnath and Chhichhore. His last film, Dil Bechara, was released posthumously on the streaming platform Hotstar. He died by suicide at his home in Mumbai in June 2020, aged 34.

About Sushant Singh Rajput in brief

Sushant Singh Rajput was an Indian actor best known for his work in Hindi cinema. He starred in a number of commercially successful Bollywood films such as M. S. Dhoni: The Untold Story, Kedarnath and Chhichhore. Rajput started his career after dropping out of his engineering course at the Delhi College of Engineering and entering the theatre industry in Mumbai. His last film, Dil Bechara, was released posthumously on the streaming platform Hotstar. He died by suicide at his home in Bandra, Mumbai in June 2020, aged 34. He was reportedly an avid reader who was deeply interested in astrophysics and won the National Olympiad in Physics. He did not have any interest in engineering but his family gave him no option which left him dissatisfied. He instead wanted to become an astronaut and later an air force pilot but was also interested in Bollywood, being a fan of Shah Rukh Khan. His highest-grossing releases came with a supporting role in the satire PK, and from the titular role of Mahendra Singh Dhoni. For his performance in the latter, he received his first nomination for the Filmfare Award for Best Actor and became the winning nomination at the Indian Film Festival of Melbourne. He featured as a background dancer in the Dhoom Again song of Dhoom 2 and in Ashwariya Rai’s performance at the closing ceremony of the 2006 Commonwealth Games. He also starred in the reincarnation drama Raabta, the historical drama Sonchiriya and the action thriller Drive.

He was the founder of a non-profit organisation and has been credited as the co-founder of a technological startup. His father is a retired techincal officer and worked at Bihar State Handloom Corporation in Patna. He attended the St. Karen’s High School in Bihar to Krishna Kumar Singh and Usha Singh. His family moved to Delhi following his mother’s death in 2002 where Rajput completed his schooling for intermediate studies in Kulachi Hansraj Model School. In 2006, he moved to Mumbai, took up odd jobs and small roles while working in the Theatre industry. In 2008, he was cast as the second lead in the television series Kis Desh Mein Hai Meraa Dil. He had secured the role of Preet Singh Juneja, the brother of Harshad Chopda in the seventh episode of the show. The character was killed early in the show, but due to popularity among viewers was brought back in the final episode. The performance made an impression on the producer Ekta Kapoor who vouched for him to be the lead in another series Pavitra Rishta, reportedly against the wishes of the hosting channel Lokhande Zee Zee. He later stated that he found the experience to be liberating and wanted to continue doing it forever. In 2009, Rajput joined Nadira Babbar’s theatre group called the Ekjute in which he remained for two and a half years. He appeared in the film adaptation Kai Po Che! which became a commercial and critical success.

You want to know more about Sushant Singh Rajput?

This page is based on the article Sushant Singh Rajput published in Wikipedia (as of Dec. 14, 2020) and was automatically summarized using artificial intelligence.