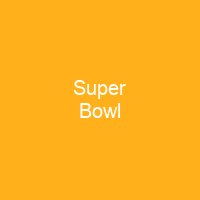 The Super Bowl is the annual championship game of the National Football League. Since 2004, the game has been played on the first Sunday in February. It is the culmination of a regular season that begins in the late summer of the previous year. In 2015, Super Bowl XLIX became the most-watched American television program in history with an audience of 114. 4 million viewers.

About Super Bowl in brief

The Super Bowl is the annual championship game of the National Football League. Since 2004, the game has been played on the first Sunday in February. It is the culmination of a regular season that begins in the late summer of the previous year. In 2015, Super Bowl XLIX became the most-watched American television program in history with an audience of 114. 4 million viewers. The New England Patriots and the Pittsburgh Steelers have the most Super Bowl championship titles with six each. The NFL restricts the use of its \”Super Bowl\” trademark, and it is frequently referred to as the \”big game\” or other generic terms by non-sponsoring corporations. The National Football Conference and the American Football Conference are tied with 27 Super Bowl wins each. In 1960, the NFL encountered its most serious competitor when the AFL vied with the NFL for players and fans. The original \”bowl game\” was the Rose Bowl Game in Pasadena, California, which was first played in 1902 as part of the Pasadena Tournament of Roses and moved to the new Rose Bowl Stadium in 1923. In the mid-1960s, Lamar Hunt, owner of the AFL’s Kansas City Chiefs, first used the term ‘Super Bowl’ to refer to the AFL–NFL championship game in the merger meetings. In a July 25, 1966, letter, Hunt wrote to NFL commissioner Pete Rozelle, ‘The leagues obviously can be improved upon’ The Pro Football Hall of Fame in Canton, Ohio, is the home of the Pro Football Championship Game, which is the NFL’s version of the Super Bowl.

The game is the second-largest day for U.S. food consumption, after Thanksgiving Day. The Super Bowl has frequently been the most watched American television broadcast of the year; the seven most-Watched broadcasts in American television history are Super Bowls. The original Super Bowl got its name from the fact that the game played there waspart of the Tournament of roses and that it was shaped like a bowl, much like the Yale Bowl in New Haven, Connecticut. The first game was played on January 15, 1967, after both leagues had completed their respective 1966 seasons. It took a half-dozen more seasons for this idea to become a reality. It was agreed that the two champion teams would begin playing in an annual AFL-NFL World Championship Game until the merger was completed in 1970. In 1967, the league stated that many people like it like ‘the Super Bowl—that’s my term for the championship game between the leagues and the two leagues and it was growing and growing until it reached the point that there was no longer a Super Bowl to be used’ The NFL said in 1967 that it would not like it to be called the ‘Merger Game’ until the media began using the term Super Bowl, which grew and grew until it was called ‘The Big Game’ and ‘The Superbowl’ in 1967. In 1968, when the NFL and the AFL merged, the name was changed to the ‘AFL Championship Game’

You want to know more about Super Bowl?

This page is based on the article Super Bowl published in Wikipedia (as of Feb. 07, 2021) and was automatically summarized using artificial intelligence.