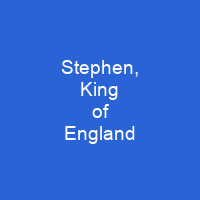 Stephen of Blois was King of England from 22 December 1135 to his death in 1144. His reign was marked by the Anarchy, a civil war with his cousin and rival, the Empress Matilda. He was succeeded by his son Henry II of England, who was the first Angevin king to be crowned as King of France.

About Stephen, King of England in brief

Stephen of Blois was King of England from 22 December 1135 to his death. He was Count of Boulogne from 1125 until 1147 and Duke of Normandy from 1135 until 1144. His reign was marked by the Anarchy, a civil war with his cousin and rival, the Empress Matilda, whose son, Henry II, succeeded Stephen as the first of the Angevin kings of England. Stephen narrowly escaped drowning with Henry I’s son, William Adelin, in the sinking of the White Ship in 1120; William’s death left the succession of the English throne open to challenge. Stephen became increasingly concerned with ensuring that his son Eustace would inherit his throne. Modern historians have extensively debated the extent to which his personality, external events, or the weaknesses in the Norman state contributed to this prolonged period of civil war. Stephen was born in Blois, France, in either 1092 or 1096. His father was Stephen-Henry, Count of Bloise and Chartres, an important French nobleman, and an active crusader, who played only a brief part in Stephen’s early life. Stephen’s mother, Adela, was the daughter of William the Conqueror and Matilda of Flanders, famous amongst her contemporaries for her piety, political talent, and influence. The King’s power was linked to the rich province of Île-de-France, just to the east of Stephen’s home county.

The rulers of this region were still fighting over the collective Anglo-Norman inheritance, with a similar language, albeit the same regional dialects, from which Stephen’s children followed the same religion. Stephen died in 1144 and was succeeded by his son Henry II of England, who was the first Angevin king to be crowned as King of France in 1215. Stephen is buried in the Abbey of Saint-Germain-en-Laye, near Paris, in France, where he is buried with his wife Matilda. He is buried next to his daughter, Beatrice, his son-in-law, and his grandson, William of Ypres, the Prince of Wales. The couple had a son, EustACE, who became King of Wales in 1170. Stephen and Matilde had a daughter, Eudoxia, who died in childbirth in 1180. Stephen had a second son, Wenceslaus, who went on to become King of the Belgians and of the Netherlands. Stephen also had two sons, William and Eustac, both of whom died in infancy. He died in 1153 and was buried in Boulogsne, in what is now the French city of Bordeaux. He also had several children, including William of Maine, the son of the Count of Maine and Count of Anjou, who later became the Duke of Maine. Stephen lived in the 12th century in a loose collection of counties, under the control of smaller polities, in which he had minimal control of France.

You want to know more about Stephen, King of England?

This page is based on the article Stephen, King of England published in Wikipedia (as of Dec. 07, 2020) and was automatically summarized using artificial intelligence.

Henry I of England

Henry I of England