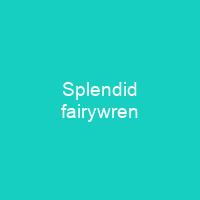 The splendid fairywren is a passerine bird in the Australasian wren family, Maluridae. It is found across much of the Australian continent from central-western New South Wales and southwestern Queensland over to coastal Western Australia. There are four subspecies currently recognized: the splendid blue wren, the purple-crowned wren and the white-shouldered wren.

About Splendid fairywren in brief

The splendid fairywren is a passerine bird in the Australasian wren family, Maluridae. It is found across much of the Australian continent from central-western New South Wales and southwestern Queensland over to coastal Western Australia. Exhibiting a high degree of sexual dimorphism, the male in breeding plumage is a small, long-tailed bird of predominantly bright blue and black colouration. The birds are socially monogamous and sexually promiscuous, meaning that although they form pairs between one male and one female, each partner will mate with other individuals. Male wrens pluck pink or purple petals and display them to females as part of a courtship display. The habitat of the splendid fairy wren ranges from forest to dry scrub, generally with ample vegetation for shelter. It has not adapted well to human occupation of the landscape and has disappeared from some urbanised areas. There are four subspecies currently recognized: the splendid blue wren, the purple-crowned wren and the white-shouldered wren. In 1975, three of the subspecies were considered separate species as they were each originally described far from their borders with the others. However, as the interior of Australia was explored, it became apparent there were areas of hybridisation where subspecies overlapped. In 1982, ornithologist Richard Schodde proposed a southern origin for the common ancestor of the superb and splendid Fairywrens.

A 2017 molecular study suggests the original split was only very recent as the current more favourable climate saw them expand and interbreed again where they overlap once again. The bird mainly eats insects and supplements its diet with seeds. It was first classified as a member of the Old World flycatcher family Muscicapidae by Richard Bowdler Sharpe, though it was later placed in the warbler family Sylviidae by the same author. The specific epithet is derived from the Latin splendens, which means “shining”. The species is one of eleven species of the genus Malurus, commonly known as fairyw Rens, found in Australia and lowland New Guinea. Within the genus it is most closely related to the superb fairy Wren. These two species are closelyrelated to the Purple-Crowned Fairy Wren of north-western Australia. The splendid fairyWren is unrelated to the true wren as it is not related to it in any other way. A study using both mitochondrial and nuclear DNA found the superb Wren and splendid Wrens diverged from each other around 7 million years ago, and their common ancestor gave rise to the white shouldered Wren, which is a red-backed, white-winged and red-wing-backed fairy-wren.

You want to know more about Splendid fairywren?

This page is based on the article Splendid fairywren published in Wikipedia (as of Nov. 14, 2020) and was automatically summarized using artificial intelligence.