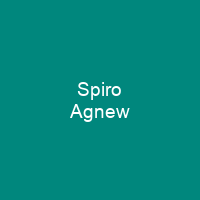 Spiro Theodore Agnew was the 39th vice president of the United States. He served from 1969 until his resignation in 1973. He was investigated by the U.S. Attorney for the District of Maryland on suspicion of criminal conspiracy, bribery, extortion and tax fraud. Agnew pleaded no contest to a single felony charge of tax evasion and resigned from office.

About Spiro Agnew in brief

Spiro Theodore Agnew was the 39th vice president of the United States. He served from 1969 until his resignation in 1973. Agnew is the second and most recent vice president to resign the position, the other being John C. Calhoun in 1832. He was investigated by the U.S. Attorney for the District of Maryland on suspicion of criminal conspiracy, bribery, extortion and tax fraud. After months of maintaining his innocence, Agnew pleaded no contest to a single felony charge of tax evasion and resigned from office. Spiro Agnew’s father was born Theophrastos Anagnostopoulos in about 1877, in the Greek town of Gargalianoi. His mother was Margaret Marian Akers, born in Bristol, Virginia, in 1883, and moved to Washington, D. C. as a young adult. In 1908, he moved to Baltimore, where he purchased a restaurant. In the early 1920s, the Agnew family acquired a larger restaurant in the Piccadilly neighborhood of Baltimore, and Spiro grew up in the light of his father’s beliefs. In 1969, after his vice presidential inauguration, Baltimore’s Greek community endowed a scholarship in Spiro’s name, and the family moved to a larger house in Piccadrilly. The Agnews moved in the early 1980s to a new home in downtown Baltimore, which they called the “Agnew House” Spiro was a lifelong self-educator, and maintained a lifelong interest in philosophy; one family member recalled that if he wasn’t reading something to improve his mind, he wouldn’t read.

In 1962, he was elected Baltimore County Executive. In 1966, Ag new was elected Governor of Maryland, defeating his Democratic opponent George P. Mahoney and independent candidate Hyman A. Pressman. In 1972, he and Richard Nixon were re-elected for a second term, defeating Senator George McGovern and his running mate Sargent Shriver. In 1973, he resigned as vice president after being accused of taking kickbacks from contractors during his time as governor. The payments had nothing to do with the Watergate scandal, in which he was not implicated. He spent the remainder of his life quietly, rarely making public appearances. He wrote a novel and a memoir; both defended his actions. He is survived by his wife, Margaret Pollard, and their son, Roy Agnew, who was 10 years old when his father died in 1917. He died on November 9, 1918, and was buried in Baltimore’s Calvary Cemetery, near where his mother and father had lived for more than 50 years. He had a daughter, Margaret Agnew; his son Roy was also born in 1917, and he had a son, Spiro Theodore, who grew up to be a successful businessman and politician. He also had a stepson, Michael Agnew. He and his wife Margaret were married on December 12, 1917. The couple had one child, Roy, who died in April 1917.

You want to know more about Spiro Agnew?

This page is based on the article Spiro Agnew published in Wikipedia (as of Dec. 26, 2020) and was automatically summarized using artificial intelligence.