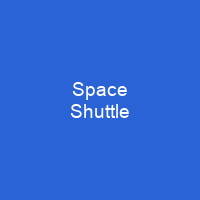 The Space Shuttle was a partially reusable low Earth orbital spacecraft system operated from 1981 to 2011. Five complete Space Shuttle orbiter vehicles were built and flown on a total of 135 missions. The Shuttle was retired from service upon the conclusion of Atlantis’s final flight on July 21, 2011. NASA relied on the Russian Soyuz spacecraft to transport astronauts to the ISS until the first Commercial Crew Development launch on November 2020.

About Space Shuttle in brief

The Space Shuttle was a partially reusable low Earth orbital spacecraft system operated from 1981 to 2011. The first of four orbital test flights occurred in 1981, leading to operational flights beginning in 1982. Five complete Space Shuttle orbiter vehicles were built and flown on a total of 135 missions. The Space Shuttle fleet’s total mission time was 1322 days, 19 hours, 21 minutes and 23 seconds. Four fully operational orbiters were initially built: Columbia, Challenger, Discovery, and Atlantis. Of these, two were lost in mission accidents: Challenger in 1986 and Columbia in 2003. A fifth operational orbiter, Endeavour, was built in 1991 to replace Challenger. The Shuttle was retired from service upon the conclusion of Atlantis’s final flight on July 21, 2011. NASA relied on the Russian Soyuz spacecraft to transport astronauts to the ISS from the last Shuttle flight until the first Commercial Crew Development launch on November 2020. The program tested aerodynamic characteristics that would later be incorporated in design of the Space Shuttle, including unpowered landing from a high altitude and speed. In the late 1950s, NASA and the Air Force collaborated on developing lifting bodies to test aircraft that primarily generated lift from their fuselages instead of wings. The X-20 Dyna-Soar program was never developed beyond the initial design phase in 1962–1963. In 1968, NASA issued a request for designs for a specific reusable shuttle spacecraft. Rather than a contract based upon a contract award, NASA announced a phased approach based upon initial proposals, which would later become the SpaceShuttle rather than Space Shuttle Rather than Space shuttle, which was the later name for the Space Transportation System (STS) The STS program was canceled in 1991.

The U.S. Air Force had conducted a study in 1957 to test the feasibility of reusable boosters, which became the basis for the aerospaceplane, a fully reusable spacecraft that was never developing beyond the design phase. The Air Force also conducted a test of the X-24B in 1961 and 1962, and tested the M2-F1, M2.F2, M1-F3, HL-10, X- 24A, and the X.24B. In 1966, the Air Air Force released a joint study concluding that a new vehicle was required to satisfy respective future demands, and that a reusable system would be the most cost effective solution. In August 1968, George Mueller, head of the Office of Manned Space Flight, announced the plan for a reusable shuttle. In September 1968, a contract was awarded for designing the components of the Integrated Launch and Re-entry Vehicle (ILRV), which was later called Space Shuttle C. In December 1968, the NASA and Air Force announced a contract for the design of a reusable spacecraft, which later became Space Shuttle D. In January 1969, the two companies announced a plan for the reusable Space Shuttle E. The second phase of the Shuttle program was called the Space shuttle E. In March 1969, NASA awarded a contract to a company to design and build a reusable spaceplane. In November 1969, an agreement was reached between NASA and Lockheed Martin for the development of the reusable spacecraft.

You want to know more about Space Shuttle?

This page is based on the article Space Shuttle published in Wikipedia (as of Dec. 03, 2020) and was automatically summarized using artificial intelligence.