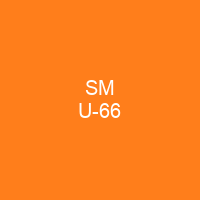 SM U-66 was the lead ship of the U-7 class for the Austro-Hungarian Navy. She sank 24 ships with a combined gross register tonnage of 69,967 in six war patrols. She left Emden on her seventh patrol on 2 September 1917 for operations in the North Channel. Neither she nor any of her 40-man crew were ever heard from again.

SM U-66 was the lead ship of the U-7 class for the Austro-Hungarian Navy. She sank 24 ships with a combined gross register tonnage of 69,967 in six war patrols. The U-boat also torpedoed and damaged the British cruiser Falmouth in August 1916. She left Emden on her seventh patrol on 2 September 1917 for operations in the North Channel. Neither she nor any of her 40-man crew were ever heard from again. A postwar German study offered no explanation for her loss, although British records suggest that she may have struck a mine in the Dogger Bank area. The boat was 69. 50 metres long and was armed with five torpedo tubes and a deck gun. She was towed behind a British submarine flotilla in the Baltic to host an experiment involving a telephone-looking vessel. In late October 1917, the British submarine Flotilla began a submarine offensive against German ships, intending to deny free passage of iron ore from neutral Sweden to Germany. The German response was an attempt to deny the iron ore free passage to Germany, especially especially to Sweden. In November 1914, the Austrians became convinced that none of these submarines could be delivered to the Adriatic via Gibraltar, and sold the entire class to the German Imperial Navy in November 1914. Under German control, the class became known as the U -66 type and the boats were renumbered. The boats’ armament was to also include a single 6. 6 centimetres 26 deck gun, originally specified to 8 cm SK L30.

U-65 was commissioned into the Imperial German Navy on 23 July 1915 under command of Kapitnant Thorwald von Bothmer, a 31-year-old veteran of the German Navy. On 23 July 1916, SM U- 66 was assigned to the Baltic and 4th Flotillas, and towed a British vessel to the port of Emden. The submarine was sunk by a German submarine on 17 October 1917. The following day, U-67 was towed to the coast of Norway to host a radio experiment involving an innocent boat connected to the host vessel by a telephone line. The vessel was sunk on 18 October 1917 by a German submarine, connected by a phone line to a neutral ship, and the two vessels were never seen again. The Germans never found out what had happened to the American vessel, which was sunk the next day by another submarine. The British submarine, which had been sunk by another German submarine, was never found and the Germans have never been able to find out what happened to it. The U-66 and her four sisters were sold to the Imperial German Navy on 28 November 1914 and redesignated as the Type U 66. They were redesigned and reconstructed to German specifications. The class was renumbered as the Class U 66 when her class was redesignated and all were redesignated. The Class U-6 was also renumbered when the Germans redesignated the Type U 6 and all were redesigned and reconstructed to German specifications as the Type U 7.

This page is based on the article SM U-66 published in Wikipedia (as of Oct. 31, 2020) and was automatically summarized using artificial intelligence.