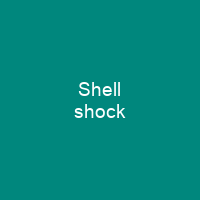 By December 1914 as many as 10% of British officers and 4% of enlisted men were suffering from ‘nervous and mental shock’ The term was first published in 1915 in an article in The Lancet by Charles Myers. By the Battle of Passchendaele in 1917, the British Army had developed methods to reduce shell shock.

About Shell shock in brief

Shell shock is a reaction to the intensity of the bombardment and fighting that produced a helplessness appearing variously as panic and being scared, flight, or an inability to reason, sleep, walk or talk. By December 1914 as many as 10% of British officers and 4% of enlisted men were suffering from ‘nervous and mental shock’ The term was first published in 1915 in an article in The Lancet by Charles Myers. Some 60–80% of shell shock cases displayed acute neurasthenia, while 10% displayed what would now be termed symptoms of conversion disorder, including mutism and fugue. The term shell shock is still used by the Veterans Administration to describe certain parts of PTSD, but mostly it has entered into memory, and it is often identified as the signature injury of the War. By the Battle of Passchendaele in 1917, the British Army had developed methods to reduce shell shock. A man who began to show shell-shock symptoms was best given a few days’ rest by his local medical officer unless they are very bad, if you have to get down the line unless you have a commotional case, or if you are in a very bad mood. In World War II and thereafter, diagnosis of ‘shell shock’ was replaced by that of combat stress reaction, a similar but not identical response to the trauma of warfare and bombardment.

If men were ‘uninjured’ it was easier to return to the front to continue fighting. If a man’s breakdown did not follow a shell explosion, it was not thought to be ‘due to the enemy’ and he was to labelled ‘Shell-shock’ or ‘S’ and was not entitled to a wound stripe or a pension. In 1915 the British. Army in France was instructed that: Shell-shock and shell concussion cases should have the letter ‘W’ prefixed to the report of the casualty, if it was due to theenemy; in that case the patient would be entitled to rank as ‘wounded’ and to wear on his arm a ‘wound stripe’ If it wasn’t the enemy, however, the patient was entitled to wear a “W” or “S” and was to be called ‘‘wounded’ by the medical officer. In 1916, at the Somme in 1916, 40% of casualties were shell-shocked, resulting in concern about an epidemic of psychiatric casualties, which could not be afforded in either military or financial terms. As the size of the British Expeditionary Force increased, and manpower became in shorter supply, the number of shellshock cases became a growing problem for the military authorities. The British Army continued to try to differentiate those whose symptoms followed explosive exposure from others.

You want to know more about Shell shock?

This page is based on the article Shell shock published in Wikipedia (as of Dec. 07, 2020) and was automatically summarized using artificial intelligence.