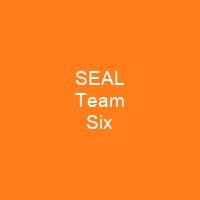 Naval Special Warfare Development Group is the U.S. Navy’s premier hostage rescue and counter-terrorism unit. Most information concerning DEVGRU is designated as classified, and details of its activities are not usually commented on. The unit is often referred to within JSOC as Task Force Blue.

About SEAL Team Six in brief

Naval Special Warfare Development Group is the U.S. Navy’s premier hostage rescue and counter-terrorism unit. Most information concerning DEVGRU is designated as classified, and details of its activities are not usually commented on by either the United States Department of Defense or the White House. The unit is often referred to within JSOC as Task Force Blue. The requirements to apply for DEV GRU states that applicants must be male, 21 years old, from the East and West Coast SEAL teams, SEAL Delivery Vehicle teams, the Special Boat teams, and amphibious reconnaissance corps. Candidates must serve at least 2 deployments on their previous assignments and be eligible for Secret clearance. All candidates are closely watched by instructors and evaluated on whether they are suitable for assignment to NSWDG. Those who pass the recruitment process will attend an eight month selection and training course with the unit’s training department known as “Green Team” The unit’s annual ammunition training allowance for the command was larger than that of the entire U. S. Marine Corps. It has been compared to the US Army’s elite Delta Force. It is the primary Tier 1 Special Mission Unit tasked with performing the most complex and dangerous missions directed by the National Command Authority. It was created in the aftermath of Operation Eagle Claw, a mission to free the American hostages held in Iran in 1979.

In 1987, SEAL Team Six was dissolved, and a new unit named the \”Naval special warfare development group\” was formed, essentially as SEAL Team six’s successor. In the early stages of creating the unit, Richard Marcinko was given a six-month window to produce the team. Had he failed to do so, the project would have been cancelled. The team’s plankowners were interviewed and hand-picked by Marcinkso from throughout the UDTSEAL community. In 1984, Marcinskio and a dozen members of SEAL Team 6 would go on to form \”Red Cell\”, a special unit designed to test the security of American military installations. In November 1980, the unit was formally commissioned, and an intense, progressive work-up training program made the unit mission-ready just six months later. According to Marcinksi, the annual ammo training allowance was bigger than that for the entire Marine Corps, and the unit has virtually unlimited resources at its disposal. In July 1983, Marcinki was the first commanding officer of this new unit. At the time there were only two SEAL Teams,. SEAL Team ONE and SEAL Team TWO. Marcinka held the command of SEALTeam Six for three years, from 1980 to July 1983. He later became the command chief of the Navy’s Special Operations Command (SOC), which is now known as the Joint Special Warfare Command (JSOC)

You want to know more about SEAL Team Six?

This page is based on the article SEAL Team Six published in Wikipedia (as of Jan. 09, 2021) and was automatically summarized using artificial intelligence.