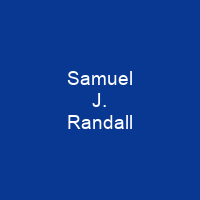 Samuel Jackson Randall was an American politician from Pennsylvania. He served as the 29th Speaker of the United States House of Representatives from 1876 to 1881. Randall was a staunch defender of protective tariffs designed to assist domestic producers of manufactured goods.

About Samuel J. Randall in brief

Samuel Jackson Randall was an American politician from Pennsylvania. He served as the 29th Speaker of the United States House of Representatives from 1876 to 1881. Born in Philadelphia to a family active in Whig politics, Randall shifted to the Democratic Party after the Whigs’ demise. His rise in politics began in the 1850s with election to the Philadelphia Common Council and then to the Pennsylvania State Senate for the 1st district. During his time in the House, he served Pennsylvania’s 1st congressional district from 1863 to 1875 and Pennsylvania’s 3rd Congressional district from 1875 to 1890. Randall served in a Union cavalry unit in the American Civil War before winning a seat in the federal House of Representative in 1862. He was re-elected every two years thereafter until his death. Randall was a staunch defender of protective tariffs designed to assist domestic producers of manufactured goods. While often siding with Republicans on tariff issues, he differed with them in his resistance to Reconstruction and the growth of federal power. Randall’s support for high tariffs began to alienate him from most Democrats, and when that party regained control of the House in 1883, he was denied another term as Speaker. He remained a respected party leader but gradually lost influence as the Democrats became more firmly wedded to free trade. Worsening health also curtailed his power until he died in 1890. He is buried in Philadelphia’s Kensington Cemetery. He had three children: Ann, Susan, and Samuel Josiah.

His maternal grandfather, Joseph Worrell, was also a prominent citizen, active in politics for the Democratic party during Thomas Jefferson’s presidency. His paternal grandfather, Matthew Randall, was a judge on the Pennsylvania Courts of Common Pleas and county prothonotary in that city in the early 19th century. In 1851, Randall assisted his father in the election campaign for a local judge, a Whig, was elected despite considerable opposition from a candidate of the nativist American Party. The strength of this group, combined with the Whig’s declining fortunes, led Randall to call himself an \”American Whig\” when he ran for Philadelphia Common council the following year. He held office for four one-year terms from 1852 to 1856. Randall married Fannie Agnes Ward, the daughter of Aaron and Mary Watson Ward of Sing Sing, New York. His new father-in-law was a major general in the New York militia and had served in Congress as a Jacksonian Democrat for several terms between 1825 and 1843. Both Randall and his father attended the Democratic National Convention in 1856 to work for James Buchanan’s nomination for president, which was successful. Randall and Buchanan were friendly with James Buchanan and his family was later serving as the Democratic’s envoy in Great Britain. He died in Philadelphia in 1890, aged only 30 years old, still old, and had risen rapidly in politics in the late 1800s and early 1900s. His family and his friends are still living in Philadelphia.

You want to know more about Samuel J. Randall?

This page is based on the article Samuel J. Randall published in Wikipedia (as of Dec. 08, 2020) and was automatically summarized using artificial intelligence.