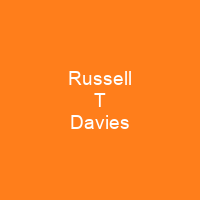 Stephen Russell Davies OBE is a Welsh screenwriter and television producer. His works include Queer as Folk, The Second Coming, Casanova, the 2005 revival of the BBC One science fiction series Doctor Who, Cucumber, andYears and Years. He was appointed Officer of the Order of the British Empire in 2008.

About Russell T Davies in brief

Stephen Russell Davies OBE is a Welsh screenwriter and television producer. His works include Queer as Folk, The Second Coming, Casanova, the 2005 revival of the BBC One science fiction series Doctor Who, Cucumber, andYears and Years. He was appointed Officer of the Order of the British Empire in 2008 for services to drama. Davies moved to Los Angeles, California in 2009, where he oversaw production of Torchwood: Miracle Day and the fifth and final series of The Sarah Jane Adventures. After his partner developed cancer in late 2011, Davies returned to the UK. He co-created the CBBC drama Wizards vs Aliens, and created Cucumbers, a Channel 4 series about middle-aged gay men in the Manchester gay scene. Davies’ later work for BBC One in the 2010s include A Midsummer Night’s Dream, a television film adaptation of William Shakespeare’s play; A Very English Scandal, a miniseries adaptation of John Preston’s novel; and Years and Years, a drama series which follows a Manchester family affected by political, economic, and technological changes to Britain over 15 years. Davies was born on 27 April 1963 at Mount Pleasant Hospital in Swansea. His father, Vivian Davies, and his mother, Barbara, were teachers. He grew up in a household that never switched the TV off until after closedown, and he subsequently became immersed in dramas such as I, Claudius and Doctor Who. One of his first memories, at the age of three, was the 1966 Doctor Who serial The Tenth Planet.

His mother was placed on a morphine drip and was institutionalised after an overdose resulted in a psychotic episode. As a child, Davies was almost always referred to by his middle name. He describes his mother’s experience as ‘literally… like science fiction’ and an early inspiration for his writing career. In his first year of primary school, the main school buildings were closed off for renovation after the cement used in construction had caused other buildings to collapse. Davies attended local Tyco Primary School in Sketty and enrolled at Olchfa Comprehensive School aged 11. At age 14, he auditioned for and joined the newly formed West Glamorgan Youth Theatre Company. He considered himself to be the founder and director of the group, and considered God to be so much more important to him so much he could see it in anything he wrote. He later joined the BBC’s children’s department, CBBC, in 1985 on a part-time basis and held various positions, which included creating two series, Dark Season and Century Falls. He eventually left the BBC for Granada Television and later started writing adult television dramas in 1994. His work in the 2000s include Bob & Rose, which portrayed a gay man who fell in love with a woman; The Second coming, which focused on the second coming and deicide of Jesus Christ from a mostly non-religious point of view; Mine All Mine, a comedy about a family who discover they own the entire city of Swansea.

You want to know more about Russell T Davies?

This page is based on the article Russell T Davies published in Wikipedia (as of Dec. 05, 2020) and was automatically summarized using artificial intelligence.