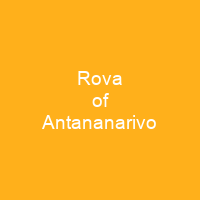 The Rova is a royal palace complex in the central highland city of Antananarivo. It served as the home of the sovereigns of the Kingdom of Imerina in the 17th and 18th centuries. A fire in 1995 destroyed or damaged all the structures within the Rova complex shortly before it was due to be inscribed on the list of UNESCO World Heritage Sites.

About Rova of Antananarivo in brief

The Rova is a royal palace complex in the central highland city of Antananarivo. It served as the home of the sovereigns of the Kingdom of Imerina in the 17th and 18th centuries, as well as of the rulers of Madagascar in the 19th century. A fire in 1995 destroyed or damaged all the structures within the Rova complex shortly before it was due to be inscribed on the list of UNESCO World Heritage Sites. The Rova grounds also contained a cross-shaped wooden house built as the private residence of Queen Rasoherina, a stone Protestant chapel, nine royal tombs, and a number of named wooden houses built in the traditional style reserved for the andriana. The largest and most prominent of these was Manjakamiadana, also known as the \”Queen’s Palace\” after Queen Ranavalona I, for whom the original wooden palace was built between 1839–1841 by Frenchman Jean Laborde. In 1867 the palace was encased in stone by Scotsman James Cameron, an artisan missionary of the London Missionary Society. The model offered by Tranovola transformed architecture throughout the highlands over the course of the 18th century, inspiring a widespread shift toward two-storey houses with verandas. Restoration was well underway in June 2020 and a new concrete \”Colosseum\” was also being built at the Queen’s Palace amid some controversy. Once the building is fully restored, ManJakamidana will serve as a museum showcasing royal artifacts saved from destruction in the fire.

It is expected to be fully restored by the end of the year and will be open to the public in the spring of 2015. The site was first inhabited between 200 BCE–300 CE by the island’s earliest settlers, the Vazimba, who appear to have arrived by pirogue from southeastern Borneo and established simple villages. By the 15th century the Merina ethnic group from the southeastern coast had established villages interspersed among existing Merina settlements. In the mid-16th century these settlements were ruled by local Merina kings. The rova’s earliest defining features had crystallised among the local rulers under Andriamanelo, who initiated the first military campaigns to expel or expel the population by force or force. The earliest rova residences typically contained a rova or rova compound, typically a palace or palace compound. The current rova was established by King Andrianampoinimerina at least 100 years before the emergence of the kingdom of Andriama in the early 17th century and is located on Analamanga, formerly the highest point on the island. The nearby fortified village of Ambohimanga served as a spiritual seat of the king in contrast to the political significance of the Rovä in the capital. It was also the seat of ancestral spiritual authority at the Rovea in the late 18th-century reign of King Andriansa.

You want to know more about Rova of Antananarivo?

This page is based on the article Rova of Antananarivo published in Wikipedia (as of Nov. 19, 2020) and was automatically summarized using artificial intelligence.