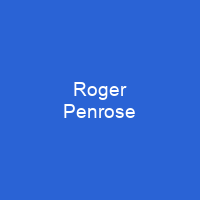 Sir Roger Penrose OM FRS is an English mathematical physicist, mathematician, philosopher of science and Nobel Laureate in Physics. He is Emeritus Rouse Ball Professor of Mathematics at the University of Oxford. He devised and popularised the Pen rose triangle in the 1950s, describing it as ‘impossibility in its purest form’ and exchanged material with the artist M. C. Escher.

About Roger Penrose in brief

Sir Roger Penrose OM FRS is an English mathematical physicist, mathematician, philosopher of science and Nobel Laureate in Physics. He is Emeritus Rouse Ball Professor of Mathematics at the University of Oxford. Penrose has made contributions to the mathematical physics of general relativity and cosmology. He has received several prizes and awards, including the 1988 Wolf Prize in Physics, which he shared with Stephen Hawking for the Penrose–Hawking singularity theorems. He devised and popularised the Pen rose triangle in the 1950s, describing it as ‘impossibility in its purest form’ and exchanged material with the artist M. C. Escher, whose earlier depictions of impossible objects partly inspired it. His uncle was artist Roland Penrose, whose son with photographer Lee Miller is Antony Penrose. Penrose is the brother of physicist Oliver Penrose,. of geneticist Shirley Hodgson, and of chess Grandmaster Jonathan Penrose . He was born in Colchester, Essex, and is the son of Margaret and psychiatrist and geneticist Lionel Penrose; and his maternal grandparents were physiologist John Beresford Leathes and his wife, Sonia Marie Natanson, a Jewish Russian who had left St. Petersburg in the late 1880s. He married Joan Isabel Wedge, in 1959; they have a son, Antony, and a daughter, Eloise. He won a NATO Research Fellowship for 1959-61, first at Princeton and then at Syracuse University. He spent two years, 1961–63, as a researcher at King’s College, London before returning to the United States to spend the year 1963-64 as a Visiting Associate Professor at Texas at Austin.

In 1964, Penrose revolutionised the mathematical tools that we use to analyse the properties of spacetime, since it is the latter that determines the trajectories of light – and hence the causal importance of light-like geodesics, hence their causal relationships. The Sing-Gravitational Collapse and Space-making paper was published in 1964, and was the first to highlight the importance of the topological structure of space and time. In the same year, he wrote a paper on the topology of space, or at most its conformal structure, since the latter is determined by the lay of the light – as determined by it – as well as its structure. In 1955, whilst still a student,. Penrose reintroduced the E. H. Moore generalised matrix inverse, also known as the Moore–Penrose inverse, after it had been reinvented by Arne Bjerhammar in 1951. In 1954, Pen rose was attending a conference in Amsterdam when by chance he came across an exhibition of Escher’s work. Soon he was trying to conjure up impossible figures of his own and discovered the tribar – a triangle that looks like a real, solid three-dimensional object, but isn’t. An article followed and a copy was sent to Escher. Completing a cyclical flow of creativity, the Dutch master of geometrical illusions was inspired to produce his two masterpieces.

You want to know more about Roger Penrose?

This page is based on the article Roger Penrose published in Wikipedia (as of Dec. 17, 2020) and was automatically summarized using artificial intelligence.