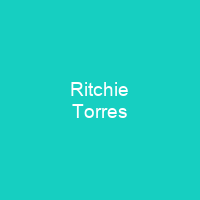 Ritchie John Torres is an American politician from New York. He is the Democratic U.S. Representative-elect for New York’s 15th congressional district. Previously, Torres served as the New York City Councilmember for the 15th district elected in 2013. Torres was the first openly gay candidate to be elected to legislative office in the Bronx.

About Ritchie Torres in brief

Ritchie John Torres is an American politician from New York. He is the Democratic U.S. Representative-elect for New York’s 15th congressional district. Previously, Torres served as the New York City Councilmember for the 15th district elected in 2013. Torres was the first openly gay candidate to be elected to legislative office in the Bronx, and the youngest member of the city council. Torres is Afro-Latino; his father is from Puerto Rico and his mother is African-American. He was raised by his mother in Throggs Neck Houses, a public housing project in the East Bronx. He attended Herbert H. Lehman High School, served in the inaugural class of the Coro New York Exploring Leadership Program, and later worked as an intern in the offices of the Mayor and Attorney General. He came out as a sophomore “during a schoolwide forum on marriage equality”. Torres enrolled at New York University, but dropped out at the beginning of his sophomore year, as he was suffering from severe depression. He struggled with suicidal thoughts based on his sexuality. Torres won the November 2020 general election, and will assume office on January 3, 2021. This makes him and Mondaire Jones theFirst openly gay Black men elected to Congress. This also made Torres the first open gay Afro Latino elected to congressional office. Torres also serves as a Deputy Leader of the City Council.

Upon his election, Torres requested the chairmanship of the Council’s Committee on Public Housing. In this role he made “the living conditions of city’s most underserved residents’ a priority. He helped secure USD 3 million for Concourse Village, Inc., a housing cooperative located in the South Bronx. According to the 2010 United States Census data, South Bronx is among the poorest districts in the nation. He also secured USD 1 million to renovate Dennis Lane Apartments, a co-op in the Mitchell-Lama Program offering below-market value buy-in rentals and below-income-restricted rentals. He said, of growing up economically disadvantaged in “slum conditions”, “I was raised in conditions of mold and vermin, lead and leaks. ” He was upset by the USD 269 million city-subsidized Trump Golf Links built “across the street” in Ferry Point Park, rather than housing for struggling New Yorkers; the course was built on a landfill, took fourteen years to be developed, and opened in 2015. He vowed then to fight for their well-being. In that role, Torres conducted site inspections and documented conditions, ensuring critical housing issues were promptly and adequately addressed. In July 2019, Torres announced his bid to succeed Representative José E. Serrano, to succeed José E. Serrano. The 15th District is one of the most Democratic leaning congressional districts.

You want to know more about Ritchie Torres?

This page is based on the article Ritchie Torres published in Wikipedia (as of Dec. 06, 2020) and was automatically summarized using artificial intelligence.