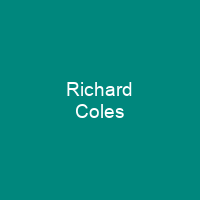 Richard Keith Robert Coles FRSA FKC is an English musician, journalist and Church of England parish priest. Now vicar of Finedon in Northamptonshire, he was formerly the multi-instrumentalist who partnered Jimmy Somerville in the 1980s band the Communards. Coles is gay.

About Richard Coles in brief

Richard Keith Robert Coles FRSA FKC is an English musician, journalist and Church of England parish priest. Now vicar of Finedon in Northamptonshire, he was formerly the multi-instrumentalist who partnered Jimmy Somerville in the 1980s band the Communards. They achieved three Top Ten hits, including the No. 1 record and best-selling single of 1986, a dance version of \”Don’t Leave Me This Way\”. Coles appears frequently on radio and television as well as in newspapers and, in March 2011, became the regular host of BBC Radio 4’s Saturday Live programme. He is a regular contributor to QI, Would I Lie to You? and Have I Got News for You. Coles is gay. The first person Coles came out to was his mother in 1978 when he was 16. He has spoken about the ‘mental crisis’ he suffered following his coming out, which ultimately led to him attempting suicide, and being diagnosed with clinical depression. His older brother, Andy, a former Metropolitan Police officer, was elected in 2015 as a Conservative councillor in Peterborough and appointed deputy Cambridgeshire Police and Crime Commissioner in 2016.

He was accused of having deceived a 19-year-old political activist into a sexual relationship in the 1990s and resigned as deputy commissioner on 15 May 2017. He lived with his civil partner, the Reverend David Coles, in a celibate relationship until the latter’s death in December 2019. Following the death, Coles says he had received hate mail claiming that his partner is in hell. He came to the Christian faith in his late twenties, after after \”the best times, the worst times, pop success and the deaths of friends as a result of HIV. From 1994 he studied for a BA in theology at King’s College London. In 2001 he became a Roman Catholic and remained so for the next ten years before returning to Anglicanism.

You want to know more about Richard Coles?

This page is based on the article Richard Coles published in Wikipedia (as of Dec. 14, 2020) and was automatically summarized using artificial intelligence.