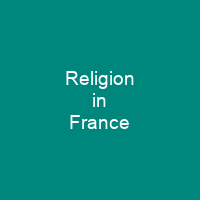 Major religions practised in France include Christianity about 47% overall of all denomination including Islam, Judaism, Buddhism, Hinduism, and Sikhism. Sunday mass attendance has fallen to 5% for the Catholics, and the overall level of observance is considerably lower than was the past.

About Religion in France in brief

Major religions practised in France include Christianity about 47% overall of all denomination including Islam, Judaism, Buddhism, Hinduism, and Sikhism. Sunday mass attendance has fallen to 5% for the Catholics, and the overall level of observance is considerably lower than was the past. The Republic is based on the principle of laïcité enforced by the 1880s Jules Ferry laws and the 1905 French law on the Separation of the Churches and the State. Catholic Christianity, the religion of a plurality of the French people, is no longer the state religion that it was before the French Revolution, as well as throughout several non-republican regimes of the 19th century. France guarantees freedom of religion as a constitutional right and generally respects this right. A tradition of anticlericalism led the state to break its ties to the Catholic Church and adopt a strong commitment to maintaining a totally secular public sector. The French are a multiconfessional country. In 2017, the Pew Research Center found that 60% of French between the ages of 15 to 29 identified themselves as Christians. In 2018, a study by the French polling agency OpinionWay funded by three Catholic institutions found, based on a sample of 1, 000, that 41% of 18 to 30 years old French people declared themselves as Catholics, 3% as Protestants, 8% as Muslim, 1% were Buddhists,1% were Jews and 3% were affiliated with other religions, 43% regarded themselves as unaffiliated.

In May 2019, the Eurobarometer conducted a survey in France, it was published in September 2019, showing the following outcome: Christian 47%, with Catholicism as the main denomination with 41%, followed by Orthodox Christian, Protestants and other Christians with 2% each one. Muslims were found to be 5%, Jewish 1%, Buddhist 1%. The 40% unaffiliated people comprised Atheist 21% and Non believers or agnostics 19%. People with other religion were 5%, and refused to answer 1%. According to the European Value Survey, between 2010 and 2012, 47% ofFrench youth declared themselves to be Christians, while according to IFOP study, around 52% of 11 to 15 years declared itself as Catholics. According to CSA poll, around 65. 4% of18 to 24 year-old French declare themselves as Christian. In the same year, according to a study jointly conducted by London’s St Mary’s University’s Benedict XVI Centre for Religion and Society and the Institut Catholique de Paris, and based on data from the European Social Survey 2014–2016, among 16 to 29 years of Frenchmen were Christians, 25% were of any religion. The data was obtained from two questions, one asking you consider yourself as belonging to any particular religion, and one asking the full sample who replied with \”Yes\”. France is the largest religion in France. During the pre-1789 Ancien Régime, France was traditionally considered to be a totally Catholic country.

You want to know more about Religion in France?

This page is based on the article Religion in France published in Wikipedia (as of Dec. 05, 2020) and was automatically summarized using artificial intelligence.