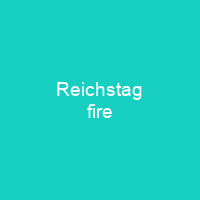 The Reichstag fire was an arson attack on the German parliament in Berlin. It occurred four weeks after Adolf Hitler was sworn in as Chancellor of Germany. The Nazis accused the Comintern of the act. Some historians believe the arson had been planned and ordered by the Nazis.

About Reichstag fire in brief

The Reichstag fire was an arson attack on the German parliament in Berlin. It occurred four weeks after Adolf Hitler was sworn in as Chancellor of Germany. The Nazis accused the Comintern of the act. Some historians believe the arson had been planned and ordered by the Nazis as a false flag operation. The building remained in its damaged state until it was partially repaired from 1961 to 1964 and completely restored from 1995 to 1999. In 2008, Germany posthumously pardoned Marinus van der Lubbe under a law introduced in 1998 to lift unjust verdicts dating from the Nazi era. The fire was blamed on a Dutch council communist, but a German court decided later that year that he had acted alone, as he had claimed. The Nazi Party used the fire as a pretext to claim that communists were plotting against the German government, which made the fire pivotal in the establishment of Nazi Germany. Hitler urged President Paul von Hindenburg to issue an emergency decree to suspend civil liberties and pursue a ‘ruthless confrontation’ with the Communist Party. After the decree was issued, the government instituted mass arrests of communists. With their bitter rival communists gone and their seats empty, the Nazi Party went from having a plurality to a majority, thus enabling Hitler to consolidate his power. In February 1933, Bulgarians Georgi Dimitrov, Vasil Tanev, and Blagoy Popov were arrested, and they played pivotal roles during the Leipzig Trial, also known as the ‘Reichstag Fire Trial’.

They were known to the Prussian police as senior Comintern operatives, but the police had no idea how senior they were. Hitler hoped to abolish democracy in a more or less legal fashion, by passing the Enabling Act. The Act gave the Chancellor the power to pass laws by decree, without the involvement of the Reich Stag. It was only supposed to be passed in times of extreme emergency and had only been used once, in 1923–24 when the government used an En enabling Act to end hyperinflation. If prompted or desired, the President could remove the Chancellor. The message of the Nazis was on the verge of a Communist revolution and that the only way to stop the Communists was to pass the En enabling act. To decrease the number of opposition members of parliament who could vote against the Act, Hitler planned to ban the Kommunische Partei Deutschlands, which at the time held 17% of the seats after the new elections and before the time of the fire. It had been dissolved by Reich President Paul Von Hindenburg and elections were scheduled for the next month after 9:00 p.m. (GMT) on February 9: 00 m. m. : 26–28. The day after the fire, the ReichStag Fire Decree was passed. It was not in session when the fire took place. At the time, the Germans had only 32% of seats, and the Nazis had not won the election.

You want to know more about Reichstag fire?

This page is based on the article Reichstag fire published in Wikipedia (as of Jan. 11, 2021) and was automatically summarized using artificial intelligence.