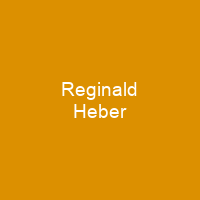 Reginald Heber was an English bishop, man of letters and hymn-writer. After 16 years as a country parson, he served as Bishop of Calcutta until his death at the age of 42. The son of a rich landowner and cleric, Heber gained fame at the University of Oxford as a poet.

About Reginald Heber in brief

Reginald Heber was an English bishop, man of letters and hymn-writer. After 16 years as a country parson, he served as Bishop of Calcutta until his death at the age of 42. The son of a rich landowner and cleric, Heber gained fame at the University of Oxford as a poet. After graduation he made an extended tour of Scandinavia, Russia and Central Europe. Ordained in 1807, he took over his father’s old parish, Hodnet, Shropshire. He also wrote hymns and general literature, including a study of the works of the 17th-century cleric Jeremy Taylor. He travelled widely and worked to improve the spiritual and general living conditions of his flock. Arduous duties, a hostile climate and poor health led to his collapse and death after less than three years in India. Memorials were erected there and in St Paul’s Cathedral, London. A collection of his hymens appeared soon after his death. One, ‘Holy, Holy, Holy! Lord God Almighty’, remains popular for Trinity Sunday. The surname ‘Heber’ probably derives from a hill in the Craven district of Yorkshire, where the family originated. The Hebers held the lordship of the manor of Marton, and were granted a coat of arms during the reign of Queen Elizabeth I. His first marriage, to Mary Baylie, produced a son, Richard Heber, who became a noted book collector and Member of Parliament for Oxford University.

His second marriage to Mary Allanson produced two further sons, the elder, born at Malpas on 21 April 1783, being named Reginald after his father. In October 1800 Heber entered Brasenose College, Oxford; his brother Richard being a fellow at the time and his father was a former fellow. In his first year, he won the University Prize for Latin Verse, and began to develop local repute as a Romantic poet. In 1803 he entered a long poem, ‘Palestine’, for the Newdigate Prize. It was later published and set to music by William Crotch, and translated into Welsh by W. Owen Pughe in 1822. The poem was enthusiastically received when Heber declaimed it at that year’s Encaenia ceremony. Heber’s later biographer Derrick Hughes finds its contemporary acclaim puzzling: ‘It is good, not even a mediocre poem; it is leadenen’ Heber left the living in February 1804, and left the parish of St Hodnet vacant, and he delayed it for some years. He took his degree in the summer of 1804 and was elected to a fellowship of All Souls College. He was also elected to Oxford University’s Bachelor’s College for All Souls, and also won the Bachelor’s Prize for Oxford’s All Souls’ College. His brother Richard was a fellow of the college and he was a friend of William Cleaver, the college’s Master and frequent visitor to Hodnet Hall.

You want to know more about Reginald Heber?

This page is based on the article Reginald Heber published in Wikipedia (as of Nov. 23, 2020) and was automatically summarized using artificial intelligence.