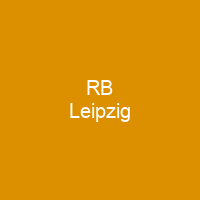 RB Leipzig e. V. is a German professional football club. The club was founded in 2009 by the energy drink company Red Bull GmbH. The team’s nickname is Die Roten Bullen due to Red Bull being the sole investor of the club. It plays its home matches at the Red Bull Arena.

About RB Leipzig in brief

RB Leipzig e. V. is a German professional football club. The club was founded in 2009 by the energy drink company Red Bull GmbH. In its inaugural season in 2009–10, the club dominated the NOFV-Oberliga Süd. It was promoted as champions to the Regionalliga Nord and was promoted to the 3. Liga in 2013. On 8 May 2016, RB Leipzig ensured promotion to the Bundesliga for the 2016–17 season with a 2-0 win over Karlsruher SC. One year later, RB Leipsig captured a place in the 2017–18 UEFA Champions League by finishing as runners-up in the Bundesliga. On 18 August 2020, the team made history by participating in their first Champions League semi-finals, losing against Paris Saint-Germain of France. The team’s nickname is Die Roten Bullen due to Red Bull being the sole investor of the club. It plays its home matches at the Red Bull Arena. Red Bull made its first attempt to enter the German football scene in 2006. The company planned a takeover, with a change of team colours and of club name. The plans were vetoed by the DFB, who rejected the proposed new club name and feared too much influence from the company. After months of fan protests against Red Bull involvement, which deteriorated into violence, the company officially abandoned the plans. In 2007, Red Bull plans to invest in Fortuna Düsseldorf, a traditional club with more than 100 years of history, closed doors behind closed doors after it became public that it wanted to acquire more than 50 percent of the shares.

As with FC Sachsen Leipzig, the plans also ran into legal difficulties: the statutes of the German Football Association did not allow a change for advertising purposes or an external investor to obtain a majority of votes for a name or a logo. In 2008, the firm made contact with Hamburg-based cult club FC St. Pauli, known for its left leaning supporters, to discuss a sponsorship deal. It immediately ended the contact, and the question never even made it to the club management. In 2009, the group decided to buy the playing rights of fifth-tier side SSV Markranstädt with the intent of advancing the new club to the top-flight Bundesliga within eight years. It is the first team since the introduction of the 2. Bundesliga to win promotion after only one season. The group also considered a deal with TSV 1860 Munich, but the club was not interested in an investment and ended their contact. By 2006, FC Sachsen leipzig played in the Oberliga, by then the fourth tier in the Germanfootball league system. It had for years been in financial difficulties. By 2008, it was the successor to the former East German champions BSG Chemie Leipzeser. The company also considered a location in West Germany and explored cities such as Hamburg, Munich and Fortuna DüsSEldorf.

You want to know more about RB Leipzig?

This page is based on the article RB Leipzig published in Wikipedia (as of Dec. 05, 2020) and was automatically summarized using artificial intelligence.