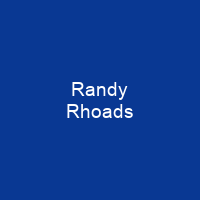 Randall William Rhoads was an American heavy metal guitarist who played with Quiet Riot and Ozzy Osbourne. He is credited with pioneering a fast and technical style of guitar soloing that largely defined the metal scene of the 1980s. He died in a plane crash while on tour with Osbourne in Florida in 1982.

About Randy Rhoads in brief

Randall William Rhoads was an American heavy metal guitarist who played with Quiet Riot and Ozzy Osbourne. He is regarded as a pivotal figure in metal music, credited with pioneering a fast and technical style of guitar soloing that largely defined the metal scene of the 1980s. He died in a plane crash while on tour with Osbourne in Florida in 1982. He was originally educated in classical guitar, helping to form a subgenre later known as neoclassical metal. With Quiet Riot, he adopted a black-and-white polka-dot theme which became an emblem for the group. His contributions in Quiet Riot’s early solo works helped to popularize various guitar techniques now common in heavy metal music. He has been included in several published \”Greatest Guitarist\” lists, and has been cited by other prominent guitarists as a major influence. His brother was also a musician, who performed under the name \”Kelle\”. In 1958, when he was 17 months old, his father left the family and remarried. All three children were subsequently raised by his mother, who opened a music school in North Hollywood called Musonia to support the family. He began taking folk and classical guitar lessons at approximately age 7 at his mother’s music school. He soon became interested in rock guitar and began taking lessons at Musonia from an instructor named Scott Shelly. The pair later formed a cover band called Violet Fox, with his older brother Kelle on drums.

After Violet Fox dissolved, they formed other short-lived bands such as The Katzenmer Kids and Mildjammer Kids. The band featured a male lead vocalist who wore dresses on stage, which sometimes led to violent reactions from the audience. According to Kelly Garni, he andRhoads discovered much of the music that influenced his early playing playing playing more obscure rock records such as early Scorpions and early Rolling Stones records. He and Garni were unpopular due to the way they looked, and the pair became best friends. He later played in a band called The Whore, rehearsing during the day at Rodney Bingenheimer’s English Disco, a 1970s Hollywood nightspot. He also played in several bands, including the band The Kooks, who were together for approximately five months, staged several performances in the Grand Salon atMusonia. In the mid-1970s, he formed a band with his friend and former bandmate, the guitarist and bassist  Kelly Garni called The Katzemer Kids, who played more obscure music such as the Rolling Stones, The Scorpions, and Alice Cooper. He became a regular hangout for the pair, and they smoked pot and listened to more obscure hard rock records. He was just starting to take lessons for it and really just riffing around when he met Kelly Garni. He had no idea how to play lead guitar yet at all. He had been playing lead guitar for about a year when he first met Garni.

You want to know more about Randy Rhoads?

This page is based on the article Randy Rhoads published in Wikipedia (as of Jan. 01, 2021) and was automatically summarized using artificial intelligence.