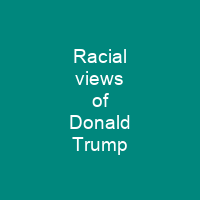 Donald Trump, the 45th president of the United States, has a history of speech and actions that have been widely viewed as racist or racially charged. Trump has repeatedly denied accusations of racism, and some people who have known him have gone on record to state that he is not racist. Trump’s controversial statements have been condemned by many observers around the world.

About Racial views of Donald Trump in brief

Donald Trump, the 45th president of the United States, has a history of speech and actions that have been widely viewed as racist or racially charged. Trump has repeatedly denied accusations of racism, and some people who have known him have gone on record to state that he is not racist. In 1973, the U.S. Department of Justice sued Trump Management, Donald Trump and his father Fred, for discrimination against African Americans in their renting practices. In 2018, during an Oval Office meeting about immigration reform, Trump allegedly referred to El Salvador, Haiti, and African countries as \”shitholes\”, which was widely condemned as a racist comment. Trump’s controversial statements have been condemned by many observers around the world, but excused by some of his supporters as a rejection of political correctness and by others because they harbor similar racist beliefs. Several studies and surveys have shown that racist attitudes and racial resentment have fueled Trump’s political ascendance, and have become more significant than economic factors in determining the party allegiance of U. S. voters. Racist and Islamophobic attitudes have been shown to be a powerful indicator of support for Trump. He retweeted false statistics claiming that African Americans are responsible for the majority of murders of white Americans, and in some speeches he has repeatedly linked African Americans and Hispanics with violent crime. Trump continued to insist, as late as 2019, that a group of black and Latino teenagers were guilty of the 1989 rape of a white woman in the Central Park jogger case, despite the five males having been officially exonerated in 2002, based on a confession by an imprisoned serial rapist that was confirmed by DNA evidence.

In July 2019, Trump tweeted about four Democratic congresswomen of color, three of whom were American-born, “Why don’t they go back and help fix the totally broken and crime-infested places from which they came. Then come back and show us how it is done.” Some interpreted his remarks as sympathetic to white supremacy, though he added that white nationalists and neo-nazis should be “condemned totally’”. He later denied his comments were racist, saying “if somebody has a problem with our country, if somebody doesn’t want to be in our country,. they should leave.’” He said that a Mexican judge of Mexican heritage should be disqualified from deciding cases against him, even though the judge was an American- born citizen of theUnited States. In 1975, Trump agreed to familiarize himself with the Fair Housing Act, stating that Black renters were welcome, give a list of vacancies, and allow the Urban League to present qualified candidates for 20% of vacancies in properties that were less than 10% non-White. Three doormen testified to discourage prospective Black renters by lying about the rental prices or claiming no vacancies were available. A settlement was reached in 1975 with Trump agreeing to take out ads stating “Black renters are welcome’.

You want to know more about Racial views of Donald Trump?

This page is based on the article Racial views of Donald Trump published in Wikipedia (as of Jan. 04, 2021) and was automatically summarized using artificial intelligence.