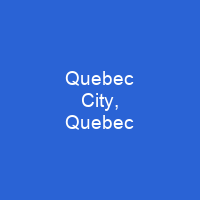 Quebec City is the capital city of the Canadian province of Quebec. As of July 2016 the city had a population of 531,902, and the metropolitan area of 800,296. In English, the city and province are officially distinguished by the fact that the province does not have an accented é and the city does.

About Quebec City, Quebec in brief

Quebec City is the capital city of the Canadian province of Quebec. As of July 2016 the city had a population of 531,902, and the metropolitan area of 800,296. It is the eleventh-largest city and the seventh-largest metropolitan area in Canada. Explorer Samuel de Champlain founded a French settlement here in 1608, and adopted the Algonquin name. Quebec City is one of the oldest European cities in North America. The ramparts surrounding Old Quebec are the only fortified city walls remaining in the Americas north of Mexico. The city’s landmarks include the Château Frontenac hotel that dominates the skyline and the Citadelle of Quebec, an intact fortress that forms the centrepiece of the ramparts. The National Assembly of Quebec and the Musée national des beaux-arts du Québec are found within or near Vieux-Québec. In English, the city and province are officially distinguished by the fact that the province does not have an accented é and the city does. Informally, however, the accent is usually omitted in common usage, so the unofficial form of ‘Quebec’ is used to distinguish the city from the province. In French, the names of provinces are gendered nouns and the name of cities are not. For example, the concept of ‘in Quebec’ is expressed as ‘à Québec’ for the city, and ‘au Québec’, ‘in’ or ‘québec’, for the province, in French. The name ‘Canada’ refers to a settlement in the early 16th century that became known as the cradle of North America’s Francophone population.

In 1665, there were 550 people living in the city. In the 1690s, Quebec was the headquarters of the French and Indian Wars against New England during the New England and Acadia Wars. It was home to the earliest known French settlement in North American, Fort Charlesbourg-Royal, established in 1541 by explorer Jacques Cartier with some 400 persons but abandoned less than a year later due to the hostility of the natives and the harsh winter. The fort was at the mouth of the Rivière du Cap Rouge, in the suburban former town of Cap-Rouge. In 1629 it was captured by English privateers, led by David Kirke, during the Anglo-French War. As part of the ongoing negotiations, in 1632 the English king Charles agreed to return the lands in exchange for paying his wife Louis XIII’s dowry. These terms were signed into law with the Treaty of Saint-Germain-Laye. The lands in Quebec were returned to the French Company of One Hundred Associates in 1665. The French Company returned the lands to Louis XIII and paid his wife the dowry as part of their exit from the war with the English. In 1788, the Treaty was signed between the English and the French, with the terms of Saint Germain- laye paying the French dowry for the return of the lands.

You want to know more about Quebec City, Quebec?

This page is based on the article Quebec City, Quebec published in Wikipedia (as of Jan. 01, 2021) and was automatically summarized using artificial intelligence.