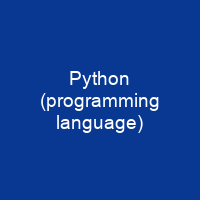 About Python (programming language) in brief

Python is an interpreted, high-level and general-purpose programming language. Its language constructs and object-oriented approach aim to help programmers write clear, logical code for small and large-scale projects. As of December 2020 Python ranked third in TIOBE’s index of most popular programming languages, behind C and Java. Python is dynamically typed and garbage-collected. It supports multiple programming paradigms, including structured and functional programming. Python uses dynamic typing and a combination of reference counting and a cycle-detecting garbage collector for memory management. It also features dynamic name resolution, which binds method and method names during program execution. The standard library has two modules that implement functional tools borrowed from Haskell and ML. The language’s core philosophy is summarized in the document Zen of Python, which includes aphorisms such as: Rather than having all of its functionality built into its core, Python was designed to be highly extensible. Python was created in the late 1980s, and first released in 1991, by Guido van Rossum as a successor to the ABC programming language, which was inspired by SETL. Python interpreters are supported for mainstream operating systems and available for a few more. A global community of programmers develops and maintains CPython, a free and open-source reference implementation of the language. Python 2. 0, released in 2000, introduced new features, such as list comprehensions, and a garbage collection system with reference counting, and was discontinued with version 2.

7 in 2020. With Python 2’s end-of-life, only Python 3. 6. x and later are supported, with older versions still supporting e. g. Windows 7. Python 3 includes the 2to3 utility, which automates the translation of Python 2 code to Python 3. The Python Software Foundation, a non-profit organization, manages and directs resources for Python and CPython development. In January 2019, active Python core developers elected Brett Cannon, Nick Coghlan, Barry Warsaw, Carol Willing and Van Rossum to a five-member \”Steering Council\” to lead the project. In July 2018, GuidoVan Rossum announced his \”permanent vacation\” from his responsibilities as Python’s Benevolent Dictator For Life, a title the Python community bestowed upon him to reflect his long-term commitment as the project’s chief decision-maker. He now shares his leadership as a member of the five-person steering council. He has since then withdrawn his nomination for the 2020 Steering Council’s nomination for a spot on the council. Python 3 is often described as a \”batteries included\” language due to its comprehensive standard library. Its compact modularity has made it particularly popular as a means of adding programmable interfaces to existing applications. It has a large standard library and easily extensible core with a large number of modules. It was designed as a less-extensible interpreter, which stemmed from his frustrations with ABC, which espoused the opposite approach for simpler applications.

You want to know more about Python (programming language)?

This page is based on the article Python (programming language) published in Wikipedia (as of Dec. 26, 2020) and was automatically summarized using artificial intelligence.