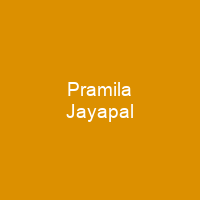 Pramila Jayapal is an American politician serving as the U.S. Representative for Washington’s 7th congressional district. She is the first Indian-American woman to serve in the House of Representatives. She previously represented the 37th legislative district in the Washington State Senate from 2015 to 2017.

About Pramila Jayapal in brief

Pramila Jayapal is an American politician serving as the U.S. Representative for Washington’s 7th congressional district since 2017. She is the first Indian-American woman to serve in the House of Representatives. She previously represented the 37th legislative district in the Washington State Senate from 2015 to 2017. Before entering electoral politics, she was a Seattle-based civil rights activist, serving until 2012 as the executive director of OneAmerica, a pro-immigrant advocacy group. In 2013 she was recognized by the White House as a \”Champion of Change. She is a co-sponsor of legislation intended to make public colleges and universities tuition-free for most families and to significantly reduce student debt for most student families. In June 29, 2018, she participated in Women Disobey and the sit-in at the Hart Senate Office Building to protest the Trump administration’s “zero-tolerance” approach to illegal immigration. She said she was proud to have been arrested for protesting the administration’s “inhumane and cruel” policy. She endorsed Senator Bernie Sanders for President of the United States in the 2016 Democratic primaries.

She was endorsed by Seattle Mayor Ed Murray and won more than 51% of the vote in the August 5 primary, out of a field of six candidates. In November 2014, she went on to defeat fellow Democrat Louis Watanabe in November 2014. In April, 2016, she finished first in the top-two primary, alongside state representative Brady Walkhaw, also a Democrat. This was the first time in the state’s history that a federal seat was contested by two Democrats. In the general election, she won with 56% of vote with 56 percent of the ballots cast. She currently serves on both the Judiciary Committee and Budget Committee; she is the only member of Congress from the State of Washington on the Judiciary committee. She also co-sponsored a bill to test and track thousands of police department rape kits. In July 2015 she was the primary sponsor of SB 5863, which directs the Washington state Department of Transportation to administer a pre-apprenticeship program targeting women and people of color.

You want to know more about Pramila Jayapal?

This page is based on the article Pramila Jayapal published in Wikipedia (as of Jan. 11, 2021) and was automatically summarized using artificial intelligence.