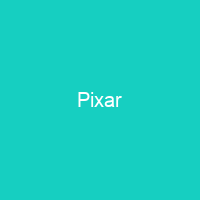 Pixar Animation Studios, commonly known as Pixar, is an American computer animation studio based in Emeryville, California. It is a subsidiary of Disney Studios Content owned by The Walt Disney Company. Pixar has produced 23 feature films, beginning with Toy Story, which was the first ever computer-animated feature film. 15 of Pixar’s films are in the 50 highest-grossing animated films of all time.

About Pixar in brief

Pixar Animation Studios, commonly known as Pixar, is an American computer animation studio based in Emeryville, California. It is a subsidiary of Disney Studios Content owned by The Walt Disney Company. Pixar began in 1979 as part of the Lucasfilm computer division, known as the Graphics Group, before its spin-off as a corporation on February 3, 1986. As of July 2019, its feature films have earned approximately USD 14 billion at the worldwide box office, with an average worldwide gross of USD 680 million per film. 15 of Pixar’s films are in the 50 highest-grossing animated films of all time. The studio has earned 21 Academy Awards, 9 Golden Globe Awards, and 11 Grammy Awards, along with numerous other awards and acknowledgments. All of the studio’s films have debuted with CinemaScore ratings of at least an \”A−\”, which indicates a positive reception with audiences. Luxo Jr., a desk lamp from theStudio’s 1986 short film of the same name, is the studio’s mascot. The company’s own implementation of the industry-standard RenderMan Interface Specification image-rendering application programming interface, RenderMan, is known as RenderMan 2.0. Pixar has produced 23 feature films, beginning with Toy Story, which was the first ever computer-animated feature film; its most recent film was Soul. It has also produced dozens of short films, including Finding Nemo, Ratatouille, Brave, Inside Out, Coco, and The Incredibles 2.

It was founded by computer scientists who shared ambitions about creating the world’s first computer- animated film. In 1974, New York Institute of Technology’s founder, Alexander Schure, established the Computer Graphics Lab, located in a converted two-story garage acquired from the former Vanderbilt-Whitney estate. Schure kept pouring money into the computer graphics lab, an estimated USD 15million, giving the group everything they desired and driving NYIT into serious financial troubles. Eventually, the group realized they needed to work in a real film studio in order to reach their goal. On September 6, 2009, Pixar executives John Lasseter, Brad Bird, Pete Docter, Andrew Stanton, and Lee Unkrich were presented with the Golden Lion award for Lifetime Achievement by the Venice Film Festival. In addition to that award, Up and Toy Story 3 were also the second and third animated films, respectively, to be nominated for the more inclusive Academy Award for Best Picture. The three that were nominate for the award without winning it are Monsters, Inc. , Cars, and Incredible 2. In addition, Pixar winners being Finding NemO, The Inc redibles, RatatOUille, WALL-E, Up, Toy Story3, Brave, Brave, Inside Out, Coco, andToy Story 4 are all among the 50 top-grossed animated films. The last three films to win an Academy Award were Cars, Inc., Up, and Up.

You want to know more about Pixar?

This page is based on the article Pixar published in Wikipedia (as of Jan. 08, 2021) and was automatically summarized using artificial intelligence.