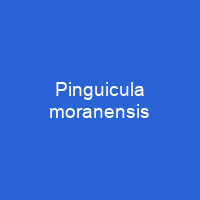 Pinguicula moranensis is a perennial rosette-forming insectivorous herb native to Mexico and Guatemala. It forms summer rosettes of flat, succulent leaves up to 10 centimeters long. These leaves are covered in mucilaginous glands that attract, trap, and digest arthropod prey. Single pink, purple, or violet flowers appear twice a year on upright stalks up to 25 centimeters long.

About Pinguicula moranensis in brief

Pinguicula moranensis is a perennial rosette-forming insectivorous herb native to Mexico and Guatemala. It forms summer rosettes of flat, succulent leaves up to 10 centimeters long. These leaves are covered in mucilaginous glands that attract, trap, and digest arthropod prey. In the winter the plant forms a non-carnivorous rosetTE of small, fleshy leaves that conserves energy while food and moisture supplies are low. Single pink, purple, or violet flowers appear twice a year on upright stalks up to 25 centimeters long. The species was first collected by Humboldt and Bonpland on the outskirts of Mina de Morán in the Sierra de Pachuca of the modern-day Mexican state of Hidalgo on their Latin American expedition of 1799–1804. It has long been cultivated for its carnivorous nature and attractive flowers, and is one of the most common butterworts in cultivation. The generic name is derived from the Latin pinguis due to the buttery texture of the surface of the carnivorous leaves. The specific epithet Moranensis refers to its type location, Mina De Moran. The extremely variable species has been redefined at least twice since, while several new species have been segregated from it based on various geographical or morphological distinctions, although the legitimacy of some of these is still debated. P. moranense remains the most. common and most widely distributed member of the Section Orcheosanthus.

As with all members of the genus, these leaf blades are densely covered by peduncular mucilagineous glands and sessile digestive glands. This wet appearance probably lure prey in search of water. Once in contact with an insect, the insect struggles to encase itself in mucilage, triggering more glands and encasing itself in a secret droplet. The secret droplets form a similar phenomenon to that observed in the sundews, which serve to. secrete enzymes and mainly serve to entrap entrap insects. The plant can bend its leaf edges slightly by thigmotropism, bringing it into contact with the flat leaf surface, which lie on the surface to digest the insect. Pinguiculae moranenses var. neovolcanica is a species of butterwort which forms a secret top of droplets across the top of the leaf surface which helps it form a leaf surface that is visible to the naked eye. It can bend the leaf edges by slightly thigmotropic, bringing the leaf edge to lie flat on the flat surface, allowing the insect to lie on its back and digest the leaf. The leaf blades of this species are smooth, rigid, and succulent, varying from bright yellow-green to maroon in colour. The laminae are generally obovate to orbicular, between 5. 5 and 13 centimeters long and supported by a 1 to 3. 5 centimetre petiole. The flowers are born singly on upright 10–25 centimeter peduncles, a feature rare among the Mexican species.

You want to know more about Pinguicula moranensis?

This page is based on the article Pinguicula moranensis published in Wikipedia (as of Oct. 29, 2020) and was automatically summarized using artificial intelligence.