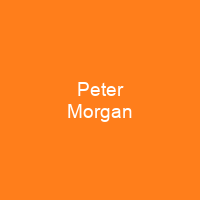 Peter Julian Robin Morgan, CBE is a British screenwriter and playwright. He is best known for his work on stage and film and television. He currently serves as the creator and showrunner of the Netflix series The Crown. In February 2017, he was awarded a British Film Institute Fellowship.

About Peter Morgan in brief

Peter Julian Robin Morgan, CBE is a British screenwriter and playwright. He is best known for his work on stage and film and television. He’s known as the playwright behind The Audience and FrostNixon and the screenwriter of The Queen and The Special Relationship. He currently serves as the creator and showrunner of the Netflix series The Crown. In 2008, Morgan was ranked number 28 in The Telegraph’s list of \”The 100 most powerful people in British culture\”. In February 2017, he was awarded a British Film Institute Fellowship. Morgan was born in Wimbledon, London. His mother, Inga, was a Catholic Pole who fled the Soviets, and his father, Arthur Morgenthau, was a German Jew. His father died when Morgan was nine years old. Morgan attended St Paul’s School in London and boarding school at Downside School, Somerset, and gained a degree in Fine Art from the University of Leeds. Morgan wrote television scripts during the 1990s, including an episode of Rik Mayall Presents..

and the Comedy Premiere The Chest. He wrote the screenplay to the romantic comedy Martha, Meet Frank, Daniel and Laurence. In 2002, Morgan had some success with the TV series The Jury. In 2003, Morgan broke through with The Deal, a television drama about the power-sharing deal between Tony Blair and Gordon Brown that was struck in the Granita restaurant in London in 1994. In 2006, The Queen was released which showed how the death of Princess Diana impacted Prime Minister Blair and the Royal Family. The film received 6 Academy Award nominations including Best Picture. Morgan received the Golden Globe Award for his screenplay from the Hollywood Foreign Press, and Helen Mirren won numerous awards for playing the title role. In 2007, Morgan and Jeremy Brock jointly won a BAFTA Film Award for their work on the film The Last King of Scotland, which Morgan adapted with Jeremy Brock.

You want to know more about Peter Morgan?

This page is based on the article Peter Morgan published in Wikipedia (as of Nov. 29, 2020) and was automatically summarized using artificial intelligence.