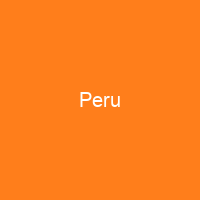 At 1.28 million km2, Peru is the 19th largest country in the world. The main spoken language is Spanish, although a significant number of Peruvians speak Quechua or other indigenous languages. The name of the country may be derived from Birú, the name of a ruler who lived near the Bay of San Miguel, Panama City, in the early 16th Century.

About Peru in brief

Peru is a country in western South America. At 1.28 million km2, Peru is the 19th largest country in the world. The main spoken language is Spanish, although a significant number of Peruvians speak Quechua or other indigenous languages. The Spanish Empire conquered the region in the 16th century and established a viceroyalty that encompassed most of its South American territories, with its capital in Lima. Peru formally proclaimed independence in 1821, and following the foreign military campaigns of José de San Martín and Simón Bolívar, and the decisive battle of Ayacucho, Peru completed its independence in1824. Peru is a developing country, ranking 82nd on the Human Development Index, with a high level of human development with an upper middle income level and a poverty rate around 19 percent. It is one of the region’s most prosperous economies with an average growth rate of 5. 9% and it has one of world’s fastest industrial growth rates at an average of 9. 6%. Its main economic activities include mining, manufacturing, agriculture and fishing; along with other growing sectors such as telecommunications and biotechnology. Peru has a population of 32 million, which includes Amerindians, Europeans, Africans and Asians. The country forms part of The Pacific Pumas, a political and economic grouping of countries along Latin America’s Pacific coast that share common trends of positive growth, stable macroeconomic foundations, improved governance and an openness to global integration.

Peru ranks high in social freedom; it is an active member of the Asia-Pacific Economic Cooperation, the Pacific Alliance, the Trans-Pacific Partnership and the World Trade Organization; and is considered as a middle power. The name of the country may be derived from Birú, the name of a ruler who lived near the Bay of San Miguel, Panama City, in the early 16th Century. In 1522, local conquistors believed this was the most part of the New World. When they came to be designated Birú or Perú, they went on to relate more instances of misunderstandings due to the lack of a common language. An alternative history is provided by the contemporary writer Francisco Pizarro de la Vega, who gave the legal status with the Crown as Capitas. He said that a common Amerindian word for Birú was “Peru” and that it was that of a conquistador on a mission on an exploratory ship on the Arias de Ávila mission in 1529. He also said that the name Birú is that of an Inca princess and a conquador and a conqueror on the mission on a voyage on a ship of a local crew on theArias de Arias mission in the 1530s. The word Perú is also used to refer to a common common language with the Spanish Crown, with the legal name with the crown as “Capitas” or “Perú” The country is bordered in the north by Ecuador, Colombia, Brazil, Bolivia, and in the southeast by Bolivia.

You want to know more about Peru?

This page is based on the article Peru published in Wikipedia (as of Dec. 08, 2020) and was automatically summarized using artificial intelligence.