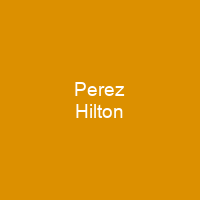 Mario Armando Lavandeira Jr. is an American blogger, columnist, and media personality. His blog, PerezHilton. com, is known for posts covering gossip items about celebrities. Hilton has written four books, hosts a podcast with Chris Booker, runs two YouTube channels, and has acted in two off-Broadway shows. He has been known to speak out publicly against discriminatory behavior of celebrities and other public figures.

About Perez Hilton in brief

Mario Armando Lavandeira Jr. is an American blogger, columnist, and media personality. His blog, PerezHilton. com, is known for posts covering gossip items about celebrities. Hilton has written four books, hosts a podcast with Chris Booker, runs two YouTube channels, and has acted in two off-Broadway shows. In 2018, he was dubbed \”the original celebrity social media influencer\” by BroadwayWorld. Hilton was born in Miami, Florida, to Cuban parents. He attended Belen Jesuit Preparatory School, an all-boys Catholic school in Miami. Hilton graduated in 1996, and the aspiring actor received a scholarship to New York University. He also briefly worked as a media relations assistant for the LGBT rights organization GLAAD. He has been known to speak out publicly against discriminatory behavior of celebrities and other public figures. He called for the firing of Isaiah Washington from ABC television series Grey’s Anatomy for making homophobic remarks and called for his readers to do the same. In early 2007, Hilton was criticized by The Hollywood Gossip blog for ignoring racist and homophobic remarks made by Paris Hilton. He claims to have befriended Paris Hilton, the source of his stage name and frequent subject of his posts. Hilton often promotes his favorite up-and-coming musicians by posting streams of their songs under the \”Listen to This\” category of his blog. London-based singer Mika’s 2007 rise to popular success in North America has been partially attributed to Hilton’s frequent support. Hilton and Mika also claim to be friends. Some have suggested that Hilton’s proximity to the celebrities about whom he writes has led to biased coverage on his blog and that he has a vendetta against certain stars, such as Disney Channel star Vanessa Hudgens and Gossip Girl teen actress Taylor Momsen.

In March 2005, within the first six months of Hilton’s blogging career, PageSixSixSix. com was named \”Hollywood’s Most-Hated Website\” by The Insider, catalyzing an initial surge in its popularity which temporarily crippled its server. Hilton claimed on August 17, 2007, that he was the first media outlet in the world to announce the death of Cuban President Fidel Castro. Although Hilton claimed that U.S. officials would be making an announcement within hours, no major media outlets made such an announcement. The Associated Press later determined that rumors were sparked by a meeting of Miami officials who were later determined to discuss the city’s plans to close the road in the Keys due to a road closure break in Florida. In an interview in Cliché Magazine, Hilton said that he only started blogging as a hobby. I wanted to talk about celebrities because they’re far more entertaining, he said. Hilton often comments on celebrity awards shows, clubs, and private events he has attended, and posts photographs of himself with the celebrities he writes about under the personally Perez category of the blog. He rarely reports on stories or rumors casting Paris Hilton in a negative or unflattering light, and, unlike most gossip blogs, he often acknowledges and praises her positive achievements.

You want to know more about Perez Hilton?

This page is based on the article Perez Hilton published in Wikipedia (as of Jan. 04, 2021) and was automatically summarized using artificial intelligence.