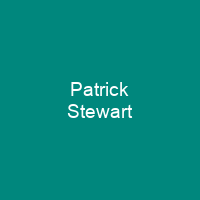 Sir Patrick Stewart OBE is an English actor, director and producer. His work has included roles on stage, television, and film, in a career spanning six decades. In 2010, Stewart was knighted by Queen Elizabeth II for services to drama.

About Patrick Stewart in brief

Sir Patrick Stewart OBE is an English actor, director and producer. His work has included roles on stage, television, and film, in a career spanning six decades. He has been nominated for Olivier, Tony, Golden Globe, Emmy, Screen Actors Guild, and Saturn Awards. In 2010, Stewart was knighted by Queen Elizabeth II for services to drama. Stewart’s first major screen roles were in BBC-broadcast television productions during the mid-late 1970s, including Hedda, and the I, Claudius miniseries. From the 1980s onward, Stewart began working in American television and film,. with prominent leading roles such as Captain Jean-Luc Picard in Star Trek: The Next Generation, its subsequent films, and 2020’s Star Trek. The X-Men series of superhero films; the lead of the Starz TV series Blunt Talk; and voice roles. in American Dad! and the narrator in Ted. In 2008 Stewart played King Claudius in Hamlet in the West End and won a second Olivier Award. In 1993, TV Guide named Stewart the Best Dramatic Television Actor of the 80s. He received a star on the Hollywood Walk of Fame on 16 December 1996. His father Alfred worked as a general labourer and as a postman. As a result of his wartime experience during the Dunkirk evacuation, his father suffered from what was then known as combat fatigue. In a 2008 interview, Stewart said: My father was a very potent individual, a very powerful man, who got what he wanted.

It was many, many years before I realised how my father inserted himself into my work. I’ve grown a moustache for Macbeth. My father didn’t have one, but when I looked in the mirror just before I went on stage I saw my father’s face staring straight back at me. Stewart spent much of his childhood in Jarrow and grew up in a poor household with domestic violence from his father, an experience which later influenced his political and ideological beliefs. He attributes his acting career to his English teacher, Cecil Dormand, who put a copy of Shakespeare in my hand said, ‘Now get up on your feet and perform’ In 1951, aged 11, he entered Mirfield Secondary Modern School, where he continued to study drama. At the age of 15, Stewart left school and increased his participation in local theatre. He gained a job as a newspaper reporter and obituary writer at the Mirfield & District Reporter, but after a year his employer gave him an ultimatum to choose acting or journalism, and he left the job. In 1966 he made his debut TV appearance on Coronation Street as a fire officer. In 1969 he had a cameo role as Horatio Horatio, opposite Ian Richardson’s Hamlet. He appeared as Vladimir Sejanus in A Midsummer’s Night’s Dream. He made his Broadway debut as Snout in Peter Brook’s Civilisation.

You want to know more about Patrick Stewart?

This page is based on the article Patrick Stewart published in Wikipedia (as of Dec. 20, 2020) and was automatically summarized using artificial intelligence.