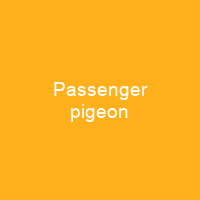 Passenger pigeon is an extinct species of pigeon that was endemic to North America. The pigeon migrated in enormous flocks, constantly searching for food, shelter, and breeding grounds. Passenger pigeons were hunted by Native Americans, but hunting intensified after the arrival of Europeans, particularly in the 19th century. The eradication of this species is a notable example of anthropogenic extinction.

About Passenger pigeon in brief

Passenger pigeon is an extinct species of pigeon that was endemic to North America. Its common name is derived from the French word passager, meaning \”passing by\”, due to the migratory habits of the species. The pigeon migrated in enormous flocks, constantly searching for food, shelter, and breeding grounds. It was once the most abundant bird in North America, numbering around 3 billion, and possibly up to 5 billion. Passenger pigeons were hunted by Native Americans, but hunting intensified after the arrival of Europeans, particularly in the 19th century. Pigeon meat was commercialized as cheap food, resulting in hunting on a massive scale for many decades. A slow decline between about 1800 and 1870 was followed by a rapid decline between 1870 and 1890. The last confirmed wild bird is thought to have been shot in 1901. Last captive birds were divided in three groups around the turn of the 20th century, some of which were photographed alive. Martha, thought to be the last passenger pigeon, died on September 1, 1914, at the Cincinnati Zoo. The eradication of this species is a notable example of anthropogenic extinction. The passenger pigeon was sexually dimorphic in size and coloration, with iridescent bronze feathers on the neck, and black spots on the wings. The bird fed mainly on mast, and also fruits and invertebrates. It practiced communal roosting and communal breeding, and its extreme gregariousness may be linked with searched for food and predator satiation.

In 1827 John Swains moved the passenger pigeon from the genus Columba to the new monotypic genus Eopistes due in part to the wings and the shape of the tail. In 1952 Francis Hemming proposed that the International Commission on Zoological Nomenclature secure the specific name Columba macroura for the mourning dove. In 1918 Harry Oberser suggested that C.canadensis should take precedence over C.migratoria for the passenger pigeons and C.carolinensis for the mourners. In the 1758 edition of his work Systema Naturae, Carl Linnaeus coined the binomial names Columba Macroura and Columba Canadensis for both the pigeon and the dove. There is nothing to suggest LinNAeus ever saw specimens of these birds himself, and his description of the birds in 1758 appears to be fully derivative of these earlier accounts and their illustrations. In his 1766 edition of Systema Naturae he dropped the name C. macroura, and instead used the name C.  m migratoria for the pigeon, and C  carolin for the mourning dove in his 1766 edition of the Systema naturae. It is thought that the two species are identical, and that Linneeus considered the two identical. In 1743 George Edwards, who used the term Columba Macroura for that bird, also called the passenger pigeon and Mourning Dove.

You want to know more about Passenger pigeon?

This page is based on the article Passenger pigeon published in Wikipedia (as of Dec. 02, 2020) and was automatically summarized using artificial intelligence.