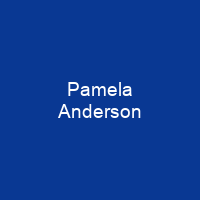 Pamela Denise Anderson is a Canadian-American actress, model, and television personality. Anderson rose to prominence after being selected as the February 1990 Playmate of the Month for Playboy magazine. She has appeared in films, including Raw Justice, Barb Wire, Scary Movie 3, Borat, and Blonde and Blonder. Anderson claims she suffered sexual abuse as a child.

About Pamela Anderson in brief

Pamela Denise Anderson is a Canadian-American actress, model, and television personality. Anderson rose to prominence after being selected as the February 1990 Playmate of the Month for Playboy magazine. She went on to frequent appearances on the magazine’s cover, holding the record of the most Playboy covers by any person. Anderson became known to a wider audience in 1991, appearing as Lisa on the award-winning ABC comedy series Home Improvement for its first two seasons. The following year, she received international recognition for her starring role as C. J. Parker in the action-drama series Baywatch, further cementing her status as a sex symbol. Anderson has appeared in films, including Raw Justice, Barb Wire, Scary Movie 3, Borat, and Blonde and Blonder. In 2006, she was inducted into Canada’s Walk of Fame and played the role of Skyler Dayton in the Fox sitcom Stacked. Anderson claims she suffered sexual abuse as a child, a fact she revealed publicly in 2014. She said she was molested by a female babysitter from ages 6 to 10, raped by a 25-year-old man when she was age 12, and gang-raped by her boyfriend and six of his friends whenshe was 14. She has also endorsed PETA activities and released four autobiography books and two novels. She was born in Ladysmith, British Columbia, the daughter of Barry, a furnace repairman, and Carol Anderson, a waitress. Anderson got some press coverage right after her birth as a \”Centennial Baby\”, having been born on July 1, 1967, the 100th anniversary of Canada’s official founding via the Constitution Act, 1867.

Her great-grandfather, Juho Hyytiäinen, was Finnish and partly of Romani descent, a native of Saarijärvi, and left the Grand Duchy of Finland for Canada in 1908. He changed his name to Anderson when he arrived as an immigrant. Anderson’s Playboy career spans 22 years, and she has appeared on more Playboy covers than any other model. In 1993, Anderson appeared in a music video by Vince Neil to promote his solo album Exposed. In 1994, she reprised her role in a Baywatch reunion movie, Hawaiian Hawaiian Wedding, and also starred in commercials for DirecTV. She left the show after two minor minor seasons and won a role on the show C.J. Parker on Baywatch,. She played for five seasons between 1992 and 1997, making her one of the longest-serving cast members. She also appeared on Dancing with the Stars, VIP Brother, Dancing on Ice, and Danse avec les stars. She has a younger brother named Gerry, an actor and producer who worked with her in V. I. P., Stripperella, Stacked, and Blond and Blonk. Anderson moved to Los Angeles to further pursue a modeling career. In 1989, Anderson attended a BC Lions Canadian Football League game at the BC Place Stadium in Vancouver, where she was featured on a Labatt’s Beer T-shirt.

You want to know more about Pamela Anderson?

This page is based on the article Pamela Anderson published in Wikipedia (as of Jan. 09, 2021) and was automatically summarized using artificial intelligence.