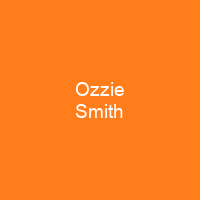 Osborne Earl ‘Ozzie’ Smith is an American former baseball shortstop. He played in Major League Baseball for the San Diego Padres and St. Louis Cardinals from 1978 to 1996. Smith won the NL Gold Glove Award for play at shortstop for 13 consecutive seasons. He was elected to the Baseball Hall of Fame in his first year of eligibility in 2002.

About Ozzie Smith in brief

Osborne Earl ‘Ozzie’ Smith is an American former baseball shortstop. He played in Major League Baseball for the San Diego Padres and St. Louis Cardinals from 1978 to 1996. Smith won the NL Gold Glove Award for play at shortstop for 13 consecutive seasons. A 15-time All-Star, he accumulated 2,460 hits and 580 stolen bases during his career. He was elected to the Baseball Hall of Fame in his first year of eligibility in 2002. Smith retired at season’s end in 1996, and his uniform number was subsequently retired by the Cardinals. Smith served as host of the television show This Week in Baseball from 1997 to 1998. Smith was born in Mobile, Alabama, but his family moved to Watts, Los Angeles, when he was six years old. He went on to play baseball in high school and college, at Los Angeles’ Locke High School and Cal Poly-San Luis Obispo respectively. After high school, Smith attended Cal Poly San Luis Obespo in 1974 on a partial scholarship, and managed to walk on to the baseball team. In addition to his academic education, he learned to hit from Cal Poly’s starting shortstop Berdy Harr. Smith broke his leg midway through the 1974 season, and was subsequently named an All-American athlete, he established school records in career at bats and career stolen bases before graduating in 1977. He won the Silver Slugger Award as the best-hitting shortstop in 1987. Smith helped the Cardinals win the 1982 World Series. His game-winning home run during Game 5 of the 1985 National League Championship Series prompted broadcaster Jack Buck’s \”Go crazy, folks!\” play-by-play call.

Smith played a variety of sports in his youth, but considered baseball to be his favorite. He developed quick reflexes through various athletic and leisure activity, such as bouncing a ball off the concrete steps in front of his house, moving in closer to reduce reaction time with each throw. In 1965, at age 10, he endured the Watts Riots with his family, recalling that, \”We had to sleep on the floor because of all the sniping and looting going on. \”While Smith was attending juniorhigh school, his parents divorced. Continuing to pursue his interest in baseball, he would ride the bus for nearly an hour to reach Dodger Stadium, cheering for the Los Angeles Dodgers at about 25 games a year. He was a teammate of future National Basketball Association player Marques Johnson on the basketball team, and teammate of Hall-of-Fame player Eddie Murray on the baseball side. In June 1976, he was selected in the seventh round of the amateur draft by the Detroit Tigers. The Tigers could not agree on a contract; Smith was selected as an amateur player in June 1976. He later became known for performing backflips on special occasions while taking his position at the beginning of a game. Smith continued to earn Gold Gloves and All-Stars appearances on an annual basis until 1993.

You want to know more about Ozzie Smith?

This page is based on the article Ozzie Smith published in Wikipedia (as of Dec. 07, 2020) and was automatically summarized using artificial intelligence.