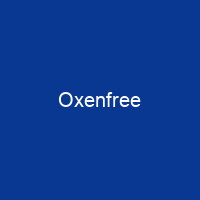 Oxenfree is a supernatural mystery graphic adventure game developed and published by Night School Studio. Players assume the role of teenage girl Alex on a weekend trip to a local island. After seemingly supernatural events occur, Alex and her friends must unravel the secrets of the island. The game was released for Microsoft Windows, OS X and Xbox One in January 2016.

About Oxenfree in brief

Oxenfree is a supernatural mystery graphic adventure game developed and published by Night School Studio. Players assume the role of teenage girl Alex on a weekend trip to a local island. After seemingly supernatural events occur, Alex and her friends must unravel the secrets of the island. Gameplay is built around the \”walk and talk\” mechanic: instead of dialogue occurring during cutscenes, speech bubbles appear over Alex’s head. Oxenfree’s visual presentation marries dark, organic, and analog elements with bright, geometric, and digital ones. Musician scntfc composed the game’s soundtrack, which features digital music production techniques alongside the use of vintage analog tape recorders and receivers. The game was released for Microsoft Windows, OS X and Xbox One in January 2016. PlayStation 4 and Linux versions were released later in 2016, followed by iOS, Android, and Nintendo Switch versions in 2017. It was nominated for multiple awards including \”Best Narrative\” at The Game Awards 2016 and \”Outstanding Achievement in Story\” at the 20th Annual D. I. C. E. Awards. It received generally positive reviews on release. Critics praised the presentation and characters, although some reviewers were left wanting more. The player’s choices and relationships with the characters determine which of several possible endings the player receives. Puzzles in the game are solved by finding the correct frequency on Alex’s handheld radio, which can perform actions such as unlocking doors or communicating with ghosts, or by winding up tape recorder at the correct speed.

Alex’s reflection in the water communicating with her, objects moving on their own, and time looping repeatedly. They find Clarissa, ex-girlfriend of Alex’s deceased brother Michael, and Nona, Clarissa’s best friend and Ren’s love interest. Alex, Ren, and Jonas explore the nearby caves, where it is rumored certain radio frequencies cause supernatural events. A ghost possesses them and possesses Jonas, revealing that the ghosts are the passengers of the USS Kanaloa, thought lost at sea. Unable to send a radio transmission off the island, Ren suggests finding the key to Maggie Adler’s estate where she kept the key. Alex creates another rift that revives Jonas, but time loops to her death before disappearing. Using the time loop, she and Jonas find Ren, but after another time loop they find him possessed by a “ghost” They find another rift which returns Ren to normal and return to the military fort, where Alex appears in a mirror, giving Alex advice. Alex and Jonas regroup at Harden Tower, where they regroup and regroup to regroup, revealing Ren, Jonas, and Clarissa are all possessed by ghosts. The final rift revives Alex and they find another time loops, but she sees an alternate reality where she saw an alternate version of herself as a young girl. The players can select dialogue options at any time during conversations, choosing to wait for other characters to finish, to interrupt, or to remain silent. At the same time, Alex remains free to move around and navigate the game world.

You want to know more about Oxenfree?

This page is based on the article Oxenfree published in Wikipedia (as of Nov. 21, 2020) and was automatically summarized using artificial intelligence.