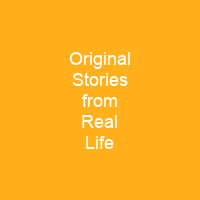 Original Stories narrates the re-education of two young girls by a wise and benevolent maternal figure. The work consists largely of personal histories of people known to Mrs. Mason and moral tales for the edification of Mary and Caroline. For the reader, the moral progress of the girls is very little, although the text emphasizes the girls’ moral progress.

About Original Stories from Real Life in brief

Original Stories from Real Life; with Conversations Calculated to Regulate the Affections, and Form the Mind to Truth and Goodness is the only complete work of children’s literature by the 18th-century English feminist author Mary Wollstonecraft. The book was first published by Joseph Johnson in 1788; a second, illustrated edition, with engravings by William Blake, was released in 1791 and remained in print for around a quarter of a century. Original Stories narrates the re-education of two young girls by a wise and benevolent maternal figure, Mrs. Mason. The work consists largely of personal histories of people known to Mrs. Mason and moral tales for the edification of Mary and Caroline. For the reader, the moral progress of the girls is very little, although the text emphasizes the girls’ moral progress, and the reader learns very little about the girls themselves. In 1789, she assembled The Female Speaker, a text meant to edify the minds of young women by exposing them to literature. She also devotes an entire chapter to outlining a national education plan—she envisioned a half-public, half-private, co-educational system. In her most famous work, A Vindication of the Rights of Woman, which is largely a defence of female education, she also describes how to raise the ideal middle-class woman. She was not alone in focusing her revolutionary writings on education; as Alan Richardson, a scholar of the period, points out, “most liberal and radical intellectuals of the time viewed education as the cornerstone of any movement for social reform”.

One reason these thinkers emphasized the training of the young mind was the pervasive acceptance of John Locke’s theory of mind, which posited that the mind is a tabula rasa, free from innate ideas, and that because children enter the world without preconceived notions; whatever ideas they absorb early in life will fundamentally affect their later development. When Woll stonecraft died in 1797, she was working on two more educational works: “Management of Infants”, a parenting manual; and “Lessons”, a reading primer inspired by Anna Laetitia Barbauld’s Lessons for Children. The girls are sent to live with their mother in the country, and are full of faults, such as greediness and vanity, and real-world demonstrations, and her own example, for example, the most of moral failings and cures. After death of their mother, the girls live with Mrs. Margaret King, who was greatly affected by her governess, saying she had freed her from all superstitions and later adopted “Mrs Mason” as a pseudonym. The girls’ story is told in a frame story and a series of inset moral tales, both of which have stories and excursions of their personal histories. In the text, Mrs Mason’s amalgamamam teaches the girls how to be virtuous and how to live in the real world. The reader learns about the very little progress the girls have made.

You want to know more about Original Stories from Real Life?

This page is based on the article Original Stories from Real Life published in Wikipedia (as of Nov. 01, 2020) and was automatically summarized using artificial intelligence.