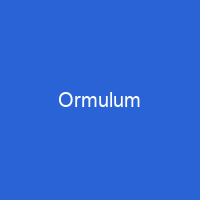 The Ormulum or Orrmulum is a twelfth-century work of biblical exegesis. It is written by a monk named Orm and consists of just under 19,000 lines of early Middle English verse. Only about a fifth of the promised material is in the single manuscript of the work to survive.

The Ormulum or Orrmulum is a twelfth-century work of biblical exegesis. It is written by a monk named Orm and consists of just under 19,000 lines of early Middle English verse. Only about a fifth of the promised material is in the single manuscript of the work to survive. The work preserves many details of English pronunciation existing at a time when the language was in flux after the Norman conquest of England. The title of the poem, “Ormulum”, is modeled after the Latin word speculum so popular in the title of medieval Latin non-fiction works that the term speculum literature is used for the genre. It seems likely that the work was never finished on the scale planned when the manuscript was written, but much of the discrepancy was probably caused by the loss of the table of contents from gatherings from the Bodleian Library in Oxford. It has few topical references to specific events that could be used to identify precisely the period of composition of the text, but it is invaluable to philologists and historical linguists in tracing the development of the language. The book is an autograph, with two of the three hands in the text generally believed by scholars to be Orm’s own, but the date of composition would have been the same as 1150.

The manuscript is incomplete, but only 32 of the book’s contents of contents remain. It is believed that there were 242 homilies, but there are only 32 that remain in the current state: MS Junius 1. It was intended to be consulted as the texts changed, and is agreed to be tedious and repetitive when read straight through. The author names himself at the end of the dedication: At the start of the preface, the author identifies himself again, using a different spelling of his name, and gives the work a title: “Orm” The name derives from Old Norse, meaning worm, serpent or dragon. The language of the OrMulum, an East Midlands dialect, is stringently of the Danelaw. It includes numerous Old Norse phrases, but there is very few Old French influences on Orm’s language. Another—likely previous—East Midlands work, the Peterborough Chronicle, shows a great deal of French influence. The linguistic contrast between it and the work of Orm demonstrates both the sluggishness of the Norman influence in the formerly Danish areas of England and the assimilation of Old Norse features into early Middle English.

You want to know more about Ormulum?

This page is based on the article Ormulum published in Wikipedia (as of Nov. 01, 2020) and was automatically summarized using artificial intelligence.