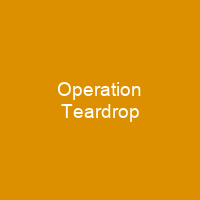 Operation Teardrop was a U.S. Navy operation during World War II. It was conducted between April and May 1945 to sink German U-boats approaching the Eastern Seaboard believed to be armed with V-1 flying bombs. After the war, it was determined the submarines had not been carrying either. The Germans were defeated in the Battle of the Atlantic and the war ended in May 1945.

About Operation Teardrop in brief

Operation Teardrop was a U.S. Navy operation during World War II. It was conducted between April and May 1945 to sink German U-boats approaching the Eastern Seaboard believed to be armed with V-1 flying bombs. After the war, it was determined the submarines had not been carrying either. Five of the seven submarines in the group stationed off the United States were sunk, four with their entire crews. Thirty-three U-546 crew members were captured, and specialists among them abusively interrogated. One destroyer escort was sunk, with the loss of most of her crew. The war ended shortly afterwards and all surviving U- boats surrendered; interrogation of their crews found that missile launching equipment was not fitted. The U. S. Atlantic Fleet prepared a plan to defend the east coast from attacks by aerial raiders and missiles. This plan was originally code-named Operation Bumblebee, and later renamed Operation Teardrops. The plan involved U. s Navy anti-submarine forces as well as United States Army Air Forces and Army units which were responsible for shooting down attacking aircraft and missile. The centerpiece of the plan was the formation of two large naval task forces to operate in the mid-Atlantic as a barrier against submarines approaching the eastern coast. These forces were formed from several existing escort carrier groups, and used Naval Station Argentia, Newfoundland, as their operating base. As well as countering the new and high-performance Type XXI submarines if they began operating in the central Atlantic, these large forces were tasked with countering the Germans.

The Atlantic Fleet’s commander, Vice Admiral Jonas H. Ingram, gave a press conference on 8 January 1945 in which he warned there was a threat of missile attack and announced that a large force had been assembled to counter seaborne missile launchers. In January 1945, German Minister of War and War Production Albert Speer made a propaganda broadcast claiming that V-2s would fall on New York by February 1, 1945, increasing the threat of an attack by the U. S. Government’s concern over the attack. The operation was completed on 6 January 1945 and the Germans were forced to give up their plans to attack New York with missiles. The Germans were defeated in the Battle of the Atlantic and the war ended in May 1945. The Allies received intelligence reports which suggested that Germany’s Kriegsmarine was planning to use V- 1 flying bombs launched from submarines to attack cities on the east Coast of the United states. The British Admiralty discounted these reports, and assessed that while V-ones could be potentially mounted on Type IX submarines, the Germans would unlikely to devote scarce resources to such a project. Despite the British Admirality’s assessments, the U-S. military and government remained concerned that Germany would conduct vengeance attacks against East Coast cities. In early November 1944, the Eastern Sea Frontier mounted an intensive search for submarines within 250 miles of New York City. In September of that year, Oscar Mantel, a spy, told his FBI interrogators that several missile-equipped U-boat were being readied.

You want to know more about Operation Teardrop?

This page is based on the article Operation Teardrop published in Wikipedia (as of Oct. 30, 2020) and was automatically summarized using artificial intelligence.